Home Guides How To Unlock Calamity Ganon In Hyrule Warriors: Age of Calamity 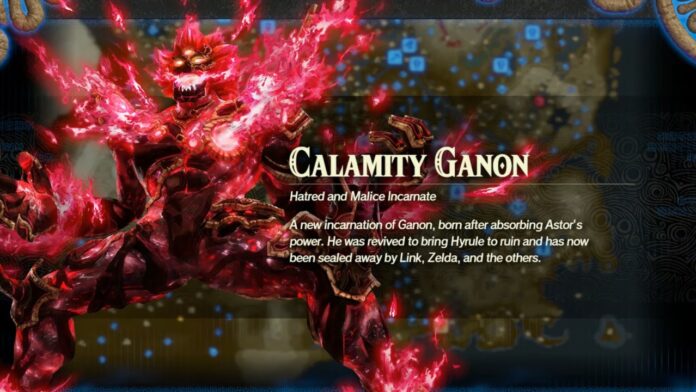 Most of the Hyrule Warriors: Age of Calamity playable characters can be unlocked fairly easily, with the exception of two characters that can only be unlocked after the main story has been completed. Unlocking Terrako is the first step to experience all of the post-game content, as unlocking the small Guardian not only gives access to the secret ending but is also a requirement to unlock a very high-level challenge that will reward you with another secret character: the fearsome Calamity Ganon.

Don’t expect to unlock Calamity Ganon coming straight from the secret ending. You will have to put some effort before being able to even have a chance to survive the battles ahead.

How To Unlock Calamity Ganon

After you have unlocked Terrako and watched the secret ending, a new challenge called Versus Calamity Ganon will become available. This is a level 74 challenge, so you need to have one of your characters at that level before even trying to attempt completing it.

A level 74 character, however, is going to have a tough time completing this challenge, as you will have to fight Astor, Harbinger Ganon and Calamity Ganon one after the other, and without being able to heal with items. These powerful enemies will also be accompanied by others, so you will have to be at the top of your game to be able to conquer this challenge. A maxed-out character is almost a requirement if you do not feel confident enough in your combat skills.

Once you defeat Calamity Ganon, the character will become fully playable. He is very fun to use, coming with a unique moveset that’s focused on spreading Malice. He plays very different from most characters, so if you wanted to spice up the post-game experience, he is the perfect character to play as.

How To Unlock Calamity Ganon In Hyrule Warriors: Age of Calamity