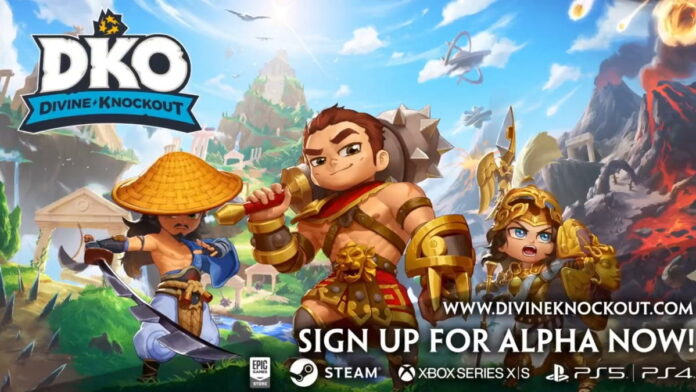 The ultimate knockout is here! Divine Knockout is a 3D platform brawler developed by Red Beard Games, the latest studio from Hi-Rez, the developers behind hit multiplayer games like Smite and Paladins. Head into the ring and try to smash your opponents off the stage with high-intensity combat! If you want to try the game out, we’ll show you how to sign-up for Divine Knockout closed alpha!

As mentioned, Divine Knockout is the premiere game from Red Beard Games, a new studio owned by Hi-Rez Studios. Hi-Rez’s library includes a variety of competitive multiplayer games, so it only makes sense that Divine Knockout joins the line-up.

If you want to be one of the first players who has the opportunity to try out Divine Knockout, make sure to sign up for the closed alpha test as soon as you can. Head on over to the official Divine Knockout website to get started.

Scroll down and you should see the sign-up form. Simply fill out the form with your name, email, and make sure to choose your preferred platform—you can play the game on PC through Steam or Epic Games, and you can also play on PS4, PS5, and Xbox.

For the purposes of the closed alpha, you’ll only be able to choose one platform, so make sure to select the one you want the most. Don’t worry, as the game is confirmed to have cross-play and cross-progression across all platforms when it officially launches.

Of course, with this being a closed alpha test, that means that you’re under NDA, so you won’t be able to share any screenshots or recordings of gameplay. Please be respectful of the developers!

That concludes our guide on how to sign-up for the Divine Knockout closed alpha test. If you have any other questions at all, please let us know in the comments below!