Home Game Guides How to Overheat a Sideways Gun in Fortnite 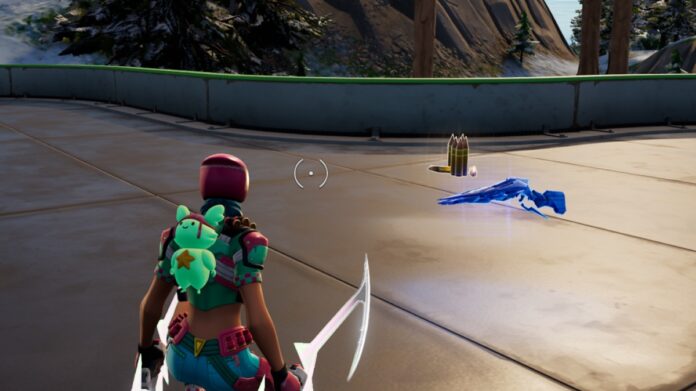 It is Sideways Showdown Week in Fortnite Chapter 3 Season 2! A set of challenges have been added with the latest patch (v20.40), each one meant to encourage players to pick up and use the Sideways weapons, and rewarding us with bonus XP. These are all available to complete until May 24, 2022. One of the special challenges set is to overheat a Sideways gun, but how does this work? Find out below!

How to Overheat a Sideways Weapon

The two Sideways weapons added this week are the Sideways Minigun and the Sideways Rifle. These otherworldly weapons were first introduced in Chapter 2 Season 8 along with Cube Monsters and the Sideways Anomalies. This week, they are back on their own, just for a bit of fun and extra XP.

The Sideways Rifle is a medium to long range weapon that can do between 40-57 damage, depending on the rarity. It is fast-firing and fully automatic and players can fire 10 medium bullets before it overheats. The Sideways Minigun is a short to medium range weapon that does between 18-24 damage depending on rarity. Just like the rifle, this weapon is fast-firing and fully automatic, firing 54 light ammo bullets before overheating.

To overheat each of these weapons, players need to fire continuously until the weapon changes color and stops working. Usually, players would not let the weapon overheat to this point as there is a cooldown period of a few seconds, and as any good player knows, every second counts in Fortnite! For this challenge, however, it is worth just firing the gun into the air, to the point where it overheats. There is no need to be in a fight with anyone for this particular quest.

Once you have completed this Sideways Showdown Week challenge, you will be rewarded with 25K XP! Good luck.

How to Overheat a Sideways Gun in Fortnite