Home Guides How To Level Up Fast In Hyrule Warriors: Age Of Calamity 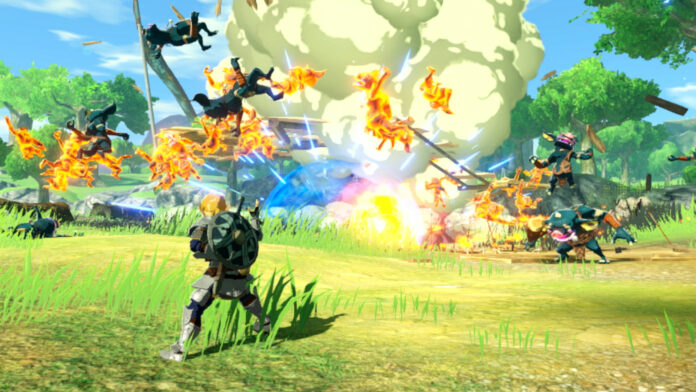 Hyrule Warriors: Age Of Calamity, like all modern Warriors games, feature some light role-playing game mechanics that make the experience slightly deeper. Sure, you will still be fighting against hordes of generic enemies furiously mashing buttons, but at least you will get the satisfaction of becoming stronger over time and survive waves of increasingly more dangerous enemies.

All characters in Hyrule Warriors: Age Of Calamity can be leveled up by obtaining EXP points. Upon level up, all stats will increase, so you will see a noticeable improvement of battle performance. Main quests and optional challenges all come with a recommended level that indicates how difficult the quest can be. Any quest can be completed at a level lower than suggested, only that it will be way more difficult.

Leveling all characters equally can be time-consuming, especially if there is a character you don’t like using, but there are a few ways to speed up this process. As some story quests lock your character choices, it is extremely important to keep all your characters leveled up and ready to go!

Before taking on any type of main story quest or challenge, it is very important to equip a weapon that comes with the EXP Bonus Seal. This weapon increases obtained EXP points, so it is a must-have if you’re trying to level up fast.

EXP Bonus Seals, like all Seals, are attached randomly to obtained weapons, so make sure to take advantage of the Weapon Fusion system to transfer the EXP Bonus Seal onto your best weapons.

Completing optional challenges over and over it a great way to level up fast any character in Hyrule Warriors: Age Of Calamity. As the difficulty level doesn’t influence in any way how much experience you get per challenge, you can speed up the process by lowering the difficulty to easy to complete the challenge as quickly as possible.

The Explosive – Handle With Care challenge is a great challenge to exploit to level up every character fast. The challenge features tons of explosive barrels, so it is very easy to complete it in around 5 minutes.

Battle performance in Hyrule Warriors: Age Of Calamity doesn’t influence the amount of EXP you get, but the total number of defeated enemies does. So, no matter if it is a challenge or a main story quest, always make sure to defeat as many enemies as you can. Main story quests grant EXP to all your characters, unlike challenges, so make sure to take advantage of this as much as possible.

Repeating the same challenges over and over again, although with different characters, can become repetitive, so if you’re still dead set on leveling up your characters, you should considering using the Military Training Camp leveling service. By spending Rupees, you can bring all your characters to the same level as your highest leveled character. Using this service is not cheap, especially at high levels, but it’s well worth it.