Home Game Guides How to Launch a Surprise Counter Attack on Attackers City in Rise... 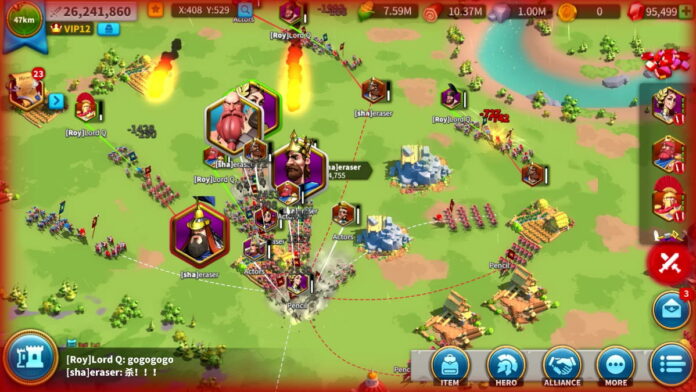 Rise of Kingdoms: Lost City puts players in the seat of the throne, overseeing a new and thriving kingdom. The game is a real-time strategy game that is always online, so other players can be developing their kingdom even when you’re not playing. Some players might be more aggressive than others, and eventually you’ll find yourself under attack. Today, we’ll show you how to get revenge and launch a surprise counterattack on an attacker’s city in Rise of Kingdoms: Lost City!

The world of Rise of Kingdoms is shared among all players on the same server, so eventually you’ll run into another player’s kingdom. You can be diplomatic and work together, or you can conquer them to rule the land—the choice is yours. Just keep in mind that even if you’re playing peacefully, other players might not have the same kind of mercy!

First off, we highly recommend enabling notifications for Rise of Kingdoms if you haven’t done so already. You must remain vigilant in the face of danger, and knowing exactly when a player might strike can make all the difference. If you have notifications enabled, you’ll receive one whenever another player scouts or attacks your kingdom.

Players scouting your kingdom isn’t always an indication that they’re going to attack—sometimes they just want intel just to be prepared if you happen to attack them. Even so, stay alert, as they can still attack at any time. You’ll also get a notification when a player does decide to attack you.

Recover and recuperate as fast as you can if you’re attacked. Your next goal is to launch a counterattack, and you can scout your attacker’s kingdom if you want more info. Just make sure that when you do, you immediately attack afterwards because the longer you wait, the more time your enemy has to prepare their defenses.

Related | How to Send Troops to Help a Friend in Trouble in Rise of Kingdoms: Lost Crusade

Speed is of the utmost importance if you want to surprise counterattack your attacker. Be swift in your actions, otherwise your attacker will catch wind of your plans and may launch a counter-counterattack! Also, keep in mind that if you’re fast enough, you can send your marches straight into incoming enemy marches and fight them on the spot. This is a great way to catch your opponents off guard!

If a player is constantly attacking your gatherers, set up a trap. This is way easier to do if you’re in an alliance, so we recommend joining one. Fill out a march with your best troops, then station them at a nearby alliance flag or city. Stay alert and watch for any marches, or just wait for a notification. When the enemy appears, attack them from your stationed location, and they’ll never know what hit them!

This is just one way to pull off a surprise counterattack in Rise of Kingdoms: Lost City. There are lots of strategic ways to approach this, so we turn to you: what’s your favorite way to get back at a hostile player? Let us know in the comments below!

How to Launch a Surprise Counter Attack on Attackers City in Rise of Kingdoms: Lost City