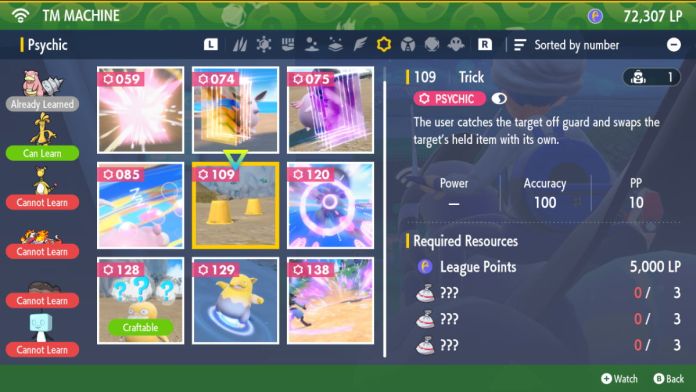 Technical Machines, or TMs, are data discs that can bestow new moves upon your Pokémon in Pokémon Scarlet & Violet. TMs are a convenient way to hone your battle strategies, as you don’t need to grind out levels to learn certain moves. Today, we’ll show you how to get Trick (TM109) in Scarlet & Violet.

TM109 teaches the Psychic-type move Trick. Trick is a utility move that swaps the user’s held item with its target. If only one Pokémon is holding an item, the item is moved and the other Pokémon is left with nothing.

You must unlock the crafting recipe for TM109 before you can craft it at the TM Machines, located at every Pokémon Center. There are two ways to do this!

The first method of unlocking TM104 is to conquer Team Star’s Fighting Crew Base, located in the northeastern zone of Paldea, in the North Province.

Storm the base to challenge the leader, Eri of the Caph Squad. She specializes in Fighting-type Pokémon, so make sure to bring Flying or Psychic Pokémon to counter her.

Defeat Eri in battle, and you’ll automatically unlock a variety of TM crafting recipes, with TM109 being one of them. If you don’t want to deal with Team Star, you can also just find TM109 out in the wild.

There are two places to find a copy of TM109. The first place is located in West Province (Area One), on the far west side of the region, near all the wind turbines. There’s a rocky cliff you can get on that has a wind turbine on it, and TM109 is near a cliff next to it.

The second place is located in Cascarrafa. Fly to Cascarrafa (North) and head east towards the houses with the blue roofs. One of the houses has TM109 sitting on the roof, so use high jump to get on top. If you don’t have high jump, you can jump from the higher level of Cascarrafa.

Once you’ve gotten a copy of TM109 for yourself, you can craft it at any TM Machine. You’ll need the following materials to craft it:

The following Pokémon can learn Trick from TM109:

That concludes our guide on how to get Trick (TM109) in Pokémon Scarlet & Violet. If you have any other tips or questions, let us know in the comments below!