Home Game Guides How to Get Thermite in COD Mobile 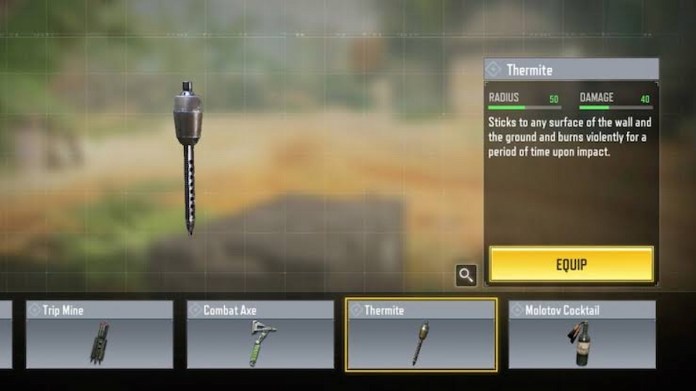 The thermite is highly sought after lethal equipment that arrived Call of Duty Mobile in middle 2020. It looks like a grenade but it isn’t. Instead, the thermite can thrown to any surface in any location and it will stick to it.

Afterwards, it will “burn violently” and at an extreme temperature that causes it to “melt material with molten iron.” In some ways, the thermite is similar to the Molotov Cocktail with the only diffrence being that the thermite can stick on surfaces and has far greater radius than the molotov cocktail.

So in this guide we will show you how to unlock the thermite.

The thermite can be unocked by playing the game’s Rocket Arm season challenge and you can find this challenge on the game’s seasonal events page.

To complete the first challenge, you have to use 10 smoke grenades and it must be in multiplayer matches. After you,ve done this, you will be rewarded with the Eagle Feather camo and you will also get 2,000 battle pass XP for completing this first task.

Remember that you cannot play the second challenge that lets you unlock the thermite without first completing the first one. If you want to end this mission fast, you can equip both an ordinary grenade and a molokov cocktail and use it on yourself as it will still count.

Okay so to unlock the thermite, you must first complete this second challenge and to do that, you have to kill 5 enemies using trip mines. We suggest that you play the Hardpoint mode to complete this challenge faster.

It can be a tricky one but it’s not impossible. After completion, the thermite will be unlocked and you will also be rewarded with 2,000 battle pass as well.

There really isn’t much you can do with a thermite except burn opponents in multiplayer matches and in stylish fashion. Season 10 of COD Mobile is currently underway in the app’s latest version after which a new season will arrive at a later date.

How to Get Thermite in COD Mobile