Home Game Guides How to Get the Peerless Parasol in Fortnite 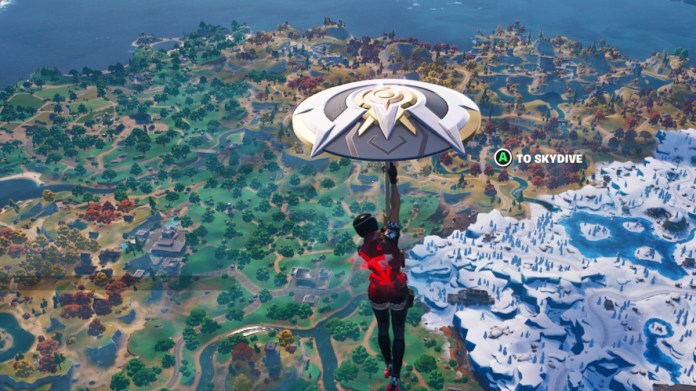 A new chapter of Fortnite has arrived! Fortnite Chapter 4 Season 1 began with a bang as a new island was formed and the intriguing story continues. The island has brand new points of interest to explore, new features and weapons to enjoy. This first season there is a futuristic-medieval theme that carries over to the exclusive Peerless Parasol glider. Find out below how to get the Peerless Parachute in Fortnite!

Every new chapter and season has its own theme and title with Chapter 4 being named Fracture. The title’s meaning usually becomes more clear as the season progress. At the moment it seems the many Fortnite islands we have seen over the years have been torn apart and, with the help of The Paradigm, elements have been pulled together to form a new island.

Chapter 4 Season 1, like season that have come before, has its own Victory Royale Umbrella. Last season, Chapter 3 Season 4, had the sleek Chromebrella glider which fitted with the chromified elements and theme of that particular season.

This seasonal glider tradition started back when Fortnite began in the original Season 1 with The Umbrella. Every new season since then, players who win a Victory Royale unlock an exclusive season-themed glider, usually shaped like an umbrella. For this season, Chapter 4 Season 1, the glider is almost shield-like in its design, decorated in white, gold, and silver.

Get yourself the Peerless Parasol glider by winning a Battle Royale match. This can be in either build mode or no-build mode, and can be a solo, duo, or squads match. Unfortunately, Team Rumble or any Creative Mode games, do not count.

Related: How to Fix Fortnite Waiting in Queue Error

When players win a Battle Royale or No Build match, they also gain a Victory Llama Crown, which is lost if they are eliminated. These crowns can also be picked up from other players when they are eliminated. When a match is won while holding a Victory Crown, the Crowning Achievement emote is unlocked and players can show off how many crowns they have won that season.

That is all you need to know to be able to get the Peerless Parasol Victory Umbrella for this season! Next up, find out how to earn the Chrome Punk skin for free before time runs out! Good luck.

How to Get the Peerless Parasol in Fortnite