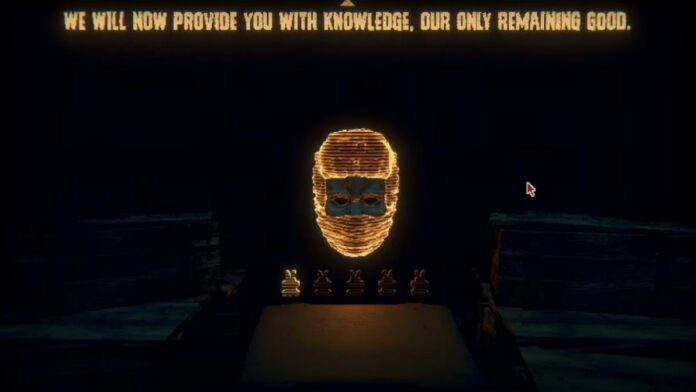 Inscryption is a genre-busting card game that’s wrapped up in a mysterious adventure. If you couldn’t guess from the unique premise alone, the game has multiple secrets hidden away, and some achievements require you to hunt them down. Today, we’ll be looking at how to get the “Forgotten Lore” achievement in Inscryption.

Many of Inscryption’s achievements are story-related, meaning that you’ll acquire them for naturally progressing through the game. However, each act has three achievements that require you to go out of your way to get them.

One of the achievements in the third act of the game is called “Forgotten Lore,” and the description says that you need to get all five cards from the Trader in P03’s factory. So, before you can get this achievement, you’ll need to get to Act III, which is near the end of the game.

During Act III, P03 will make you play a map called Botopia in the board game. Each area is designated by zones, and the zone you want is called Resplendent Bastion. You start outside a factory, so go in, and then head to the left.

You should see a giant lock, so click on it, and it will unlock and disappear. Nothing is immediately different, but you just unlocked the door to the trader outside the board game. Turn to the left, and you can go talk to the Trader.

The Trader seems like she’s talking nonsense at first, but if you pay attention closely, you can get some information and lore about the world of Inscryption. She will start talking about pelts, and you’ll see five transparent pelt icons below her head. Turns out she wants Holo-Pelts, and trading one will net you a mysterious tarot card.

Holo-Pelts are obtained by trapping bunnies. These bunnies are hidden throughout Botopia, and they’re often located behind secret movement arrows that don’t appear until you mouse over them.

Once you find the bunny, it’ll be jumping back and forth over the trap. Wait until the bunny is directly over the trap, then click on the trap to catch the bunny. This will net you a Holo-Pelt.

In order to get the Forgotten Lore achievement, you’ll need to find and give the Trader all five Holo-Pelts. Most of them are acquired by looking for bunnies hidden throughout Botopia. Here are the locations of the Holo-Pelts:

Once you’ve gotten all five Holo-Pelts, return to the Trader and give them all to her. You’ll get the Forgotten Lore achievement, alongside some vital information to understanding the plot of Inscryption.

That concludes our guide on how to get the Forgotten Lore achievement in Inscryption. If you have any other questions or tips, let us know in the comments below!

How to get the Forgotten Lore Achievement in Inscryption