Home Game Guides How to Get Saber V2 in Blox Fruits 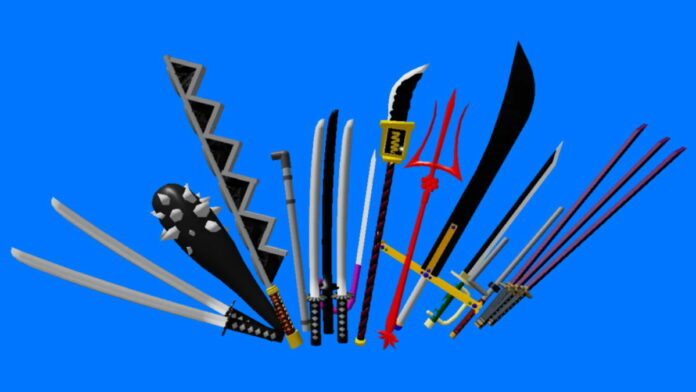 There are a variety of weapons for players to use in Roblox Blox Fruits. With long-range guns, swift swords, and magical fruits, there is no shortage of combat options. One of the swords you can get is called the Saber V2, and it’s quite powerful, but in order to get it, you must completely a very lengthy quest chain. Today, we’ll show you how to get Saber V2 in Blox Fruits!

For the first step of the quest, head over to Jungle Island. There are five hidden buttons that you must step on and activate, and they’re located all over the island, including Gorilla King’s small island. Here’s a map of their locations, courtesy of the Blox Fruits Wiki:

Related | How to Easily Defeat Captain Elephant in Blox Fruits

The buttons are small stepping buttons that usually blend into their environment, so all you need to do is walk over them. They’ll turn green once they’re activated, so you can move onto the next button.

Once all five buttons are activated, return to the hut in the middle of the lake, where the quest giver is. Head down the stairs, and there should be a hole that wasn’t there before.

Drop into the hole, and you’ll end up in a secret basement. Grab the Torch off the wall, and then read the wall to find a poem that says:

Lands of sand, eh? That must only mean one place: The Desert! The Desert is a level 60+ island in the First Sea, so there’s a good chance you’ve already been there if you’re reading this guide.

Once you’ve made it to the Desert, look for a house that’s kind of sinking into the sand. It also has a red door, making it stand out from the other buildings on the island.

Enter the house and look for a curtain near the back. Equip the Torch and stand near the curtain, causing it to ignite and burn away, revealing another mysterious poem on the wall. This time, it reads:

Sounds like we need to fill up at a cold place, so grab the Cup nearby the poem wall. Once you’re ready to go, depart the island and head for Frozen Village.

Once you’ve arrived at Frozen Village, head to the backside of the island and enter the cave where the Ability Teacher rests. This cave has a pine tree right in front of its entrance, if that helps you find it easier.

Inside the cave, you’ll see water dropping from a melting stalactite on the ceiling. Equip the Cup, and stand under the stalactite to fill up the cup.

With the filled cup, exit the cave and head to the top part of the island where the village is. Enter the house that the Sword Dealer NPC is standing next to, and talk to the Sick Man. Select the help option to give him the cup, and he’ll thank you and tell you to meet up with his son.

Head over to Pirate Village. There will be a new Rich Man NPC, so talk to him, and he’ll thank you for helping his father. He cannot reward you though, since a local mob leader stole all his money.

Head to a small island north of the Pirate Village, and you’ll find the mob leader hiding out in a cave. Defeat the mob leader, return to the Rich Man, and he’ll reward you with a mysterious relic. Head back to Jungle Island for the final step!

On Jungle Island, head over to the stone building that has the Blox Fruits Dealer Cousin on it. To the left of one of the staircases, you’ll see a black indent in the wall. Equip your relic and place it in the indent to open a secret chamber.

Related | What Does Pink Coat Do in Blox Fruits? – Answered

Inside the chamber lies the almighty Saber Expert, a level 200 boss. If you couldn’t tell by the name, this guy will shred you to pieces with his Saber if you stay too close to him. He’s quite the challenge even at level 200, so feel free to grind a bit if you’re having too much trouble.

A cheesy strategy that you can use is to pelt him with ranged attacks. Enter the Saber Expert’s chamber, but back out to the wall you opened. Saber Expert cannot leave the chamber he’s initially in, so you can stand outside and just shoot him to death. Be careful, as he has some ranged attacks of his own!

Once you take the Saber Expert down, he’ll drop his legendary Saber for you to use. The Saber is a good weapon in its own right, but you can further enhance its power by upgrading it to Saber V2.

To upgrade the Saber, you must first reach 1,000,000 bounty or honor, depending on your faction. Once you do that, you must take down a human player in PvP that is around the same level as you.

If these conditions are met correctly, you will get a message saying “something weird has occurred to your Saber”. The name of the Saber will not change, nor will it look different, but its special moves will have different effects.

Both Deadly Rush and Triple Slash will gain new properties and deal more damage. Deadly Rush now fires off multiple slices, hitting many times. Triple Slash now has you shoot out a red dragon that deals all the slashes, and it does way more damage than the V1 counterpart.

We hope you enjoy your shiny new Saber V2, and that concludes our guide on how to get Saber V2 in Blox Fruits. If you have any other questions, feel free to let us know in the comments below!

How to Get Saber V2 in Blox Fruits