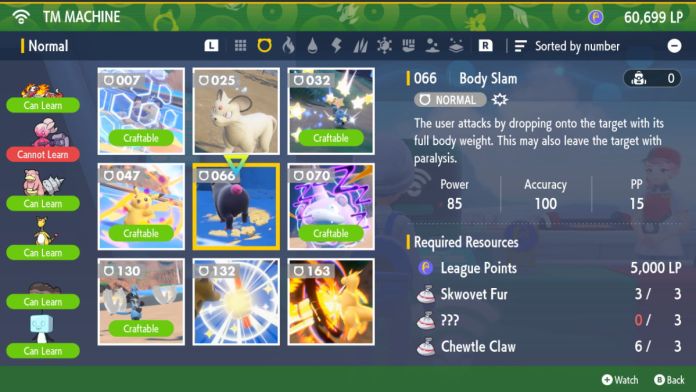 Technical Machines, or TMs, are data discs that can bestow new moves upon your Pokémon in Pokémon Scarlet & Violet. TMs are a quick and easy way to hone your battle strategies, as you don’t need to grind out levels to learn certain moves. Today, we’ll show you how to get Body Slam (TM065) in Scarlet & Violet.

TM066 teaches the Normal-type physical move, Body Slam, which attacks with 85 base power and 100 accuracy. Body Slam also has a small chance to paralyze its target.

Before you can craft TM066 at a TM Machine, you’ll need to unlock it first. There are two ways you can get TM066, and the first and main method is to storm the Team Star Poison Crew Base, located in the Tagtree Thicket in the East Province.

After defeating Atticus, Poison Crew’s leader, you’ll automatically unlock the crafting recipe for TM066 Body Slam. If you don’t want to deal with Team Star, you can also find a copy of TM066 out in the wild.

This method is a little harder, as you’ll need to best Dondozo, the False Dragon Titan. Dondozo is usually the final Titan most Trainers challenge, so it can be a difficult battle. Be sure to bring a Fairy or Ice-type Pokémon with you.

Related | How To Get Rest (TM085) in Scarlet and Violet

Dondozo can be found in Casseroya Lake, which takes up the majority of the northwestern corner of the Paldea region. Once you defeat Dondozo, Miraidon/Koraidon will gain the ability to climb up walls.

Now, fly over to Cascarrafa (North) and head northwest into the Asado Desert. Head to the location in the screenshot below and climb up the mountain to find TM066 sitting on a small open area.

Approach the rocky mountain ridge from the north side, then climb up, and you should be able to reach the area with the TM.

Once you get TM066 from either source, you can craft as many copies as you like at the TM Machines. To craft TM066, you’ll need the following materials:

That concludes our guide on how to get Body Slam (TM066) in Pokémon Scarlet & Violet. If you have any other tips or questions, let us know in the comments below!