Home Game Guides How to Get a Necramech in Warframe 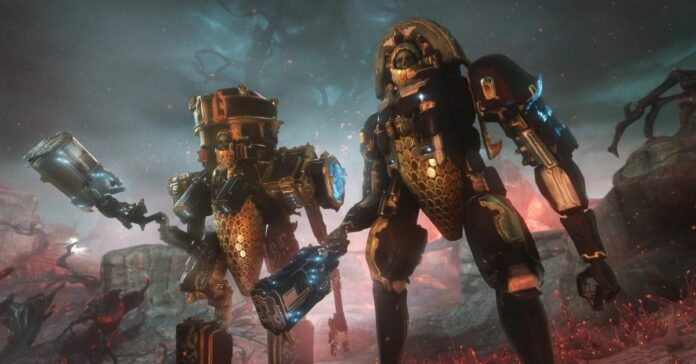 Necramechs in Warframe are Entrati heavy combat vehicles found throughout the Cambion Drift. They are humanoid mechs that are the forerunners of the Warframes that were built at the start of the Old War to fight Sentients. Tennos are able to take control of them and then use them in open-world missions and Railjack missions. In this detailed guide, we will tell you how to get and use Necramechs in Warframe.

What are Necramechs in Warframe?

The Necramehs are controlled by the Operator (which requires a completed The War Within quest) through the Transfer, regardless of whether they are found inactive on the Cambion Drift Fields or just owned by you. The operator only needs to initiate the Transfer (key 5) when he is next to a working inactive Necramech in order to operate it.

Fragments of Necramech suitable for Transfer can be identified by the blue aura emanating from them. These Necramechs will only have basic rank 0 stats with no mods.

How to Get a Necramech in Warframe?

Blueprints for the Necramechs and their parts can be obtained from the Necraloid. Damaged Necramech parts are dropped from enemy Necramechs. After assembly, each Necramech is added to the arsenal of the player.

Player-owned Necramechs are customizable and can be equipped with various Necramech mods. The Necramech Summon Equipment is automatically given to the player in the inventory after creating or purchasing the first Necramech, which allows players to summon Necramech in an open-world.

How to Get a Necramech in Warframe