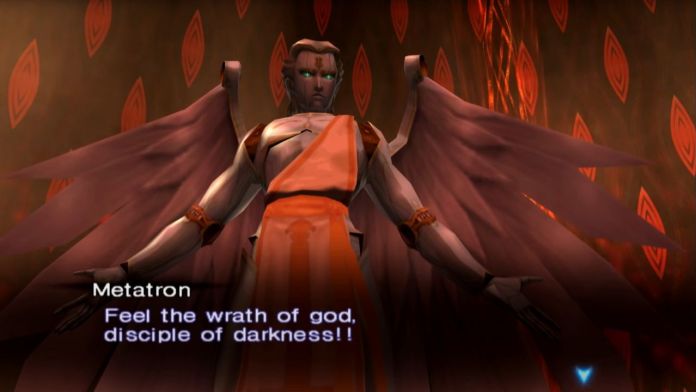 The world of Shin Megami Tensei III Nocturne HD Remaster is a world of chaos, where demons roam the land to leave their mark in the world. Not every creature in the Vortex World, however, is inherently evil. The Divine and Seraph races of demons are not out to make life hell for humans, on the contrary, they are actually trying to defend humanity from evil. Unfortunately, being a Demi-Fiend, this means that they are still your enemies, but just like every other demon, they can be made to see reason and join your party.

Here’s how to fuse Metatron in Shin Megami Tensei III Nocturne HD Remaster, his stats and his skills.

Before being able to fuse Metatron at the Cathedral of Shadows, there are two things you have to accomplish first. For starters, you need to have fused Michael already and have him either in your party or registered in the Compendium. Once this is done, you will have to fight and defeat Metatron in the Fifth Kalpa in the Labyrinth of Amala. He is an optional boss, so you may skip fighting him altogether if you’re not interested in exploring the dungeon fully.

Once this is done, you are finally able to fuse Metatron, but only via the special Sacrificial Fusion that is available during the Full phase. To fuse Metatron, you will need to fuse Michael with any other Divine or Seraph demon and sacrifice a Tyrant demon. Generally, using Dominion and Loki will yield the best results.