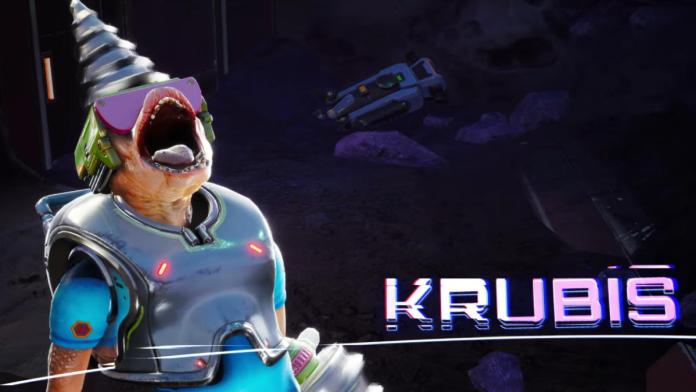 High on Life is a sci-fi first-person shooter developed by Squanch Games, which is founded by the creator of Rick & Morty. As to be expected, the game has a very comedic plot and vibe, featuring out-of-this-world characters and crude dialogue. Unfortunately, the game launched with some progress-halting bugs. Today, we’ll show you how to fix Krubis glitch in High on Life!

Troubleshooting the Krubis Glitch in High on Life

During the Bounty: Krubis mission, you’ll chase after G3’s head mining operations manager, Krubis. The boss fight with Krubis is fairly straightforward, but something tricky he does is use his drill arms to quickly get around the room without revealing his next move.

Unfortunately, there’s a game-breaking bug that has a high chance of occurring during this fight. Krubis will drill into the ground, but he’ll never pop back up. For some reason, sometimes drilling causes Krubis to reappear out of bounds.

When this happens, you won’t be able to damage Krubis any further and vice versa. Supposedly, with the December 16 patch, they fixed this issue. However, some players are still reporting it happening to them.

There’s seemingly no rhyme or reason as to why this bug occurs, but it seems to trigger the most frequently when he does his “ultimate” attack, where he drills rapidly around the arena.

Some players have suggested that simply waiting will eventually make Krubis come back to the arena. If Krubis does end up moving back into the arena, he may be invisible, and all you’ll see is his gun. Damage him and he should reappear normally.

Related | How To Find Gary The Poisoner in High On Life

Another player recommended using Glob Shots. Sometimes, if you’re lucky, Krubis won’t spawn too far from the arena’s boundaries, and a well-placed Glob Shot can make him warp back in. Check your radar, look for his indicator, then fire a Glob Shot in his general area.

The final suggestion we found is that randomly swinging around the Flyhooks will sometimes cause him to reappear in the arena. Again, we’re not sure why this works, but a few players have reported this being successful for them.

If nothing works, you’ll unfortunately have to reload your last checkpoint and restart the entire fight. There’s not much else you can do besides wait for another patch to address the issue or just keep trying.

That concludes our guide on how to fix Krubis glitch in High on Life. If you have any other things to try to fix the glitch, let us know in the comments below!

How To Fix Krubis Glitch in High on Life