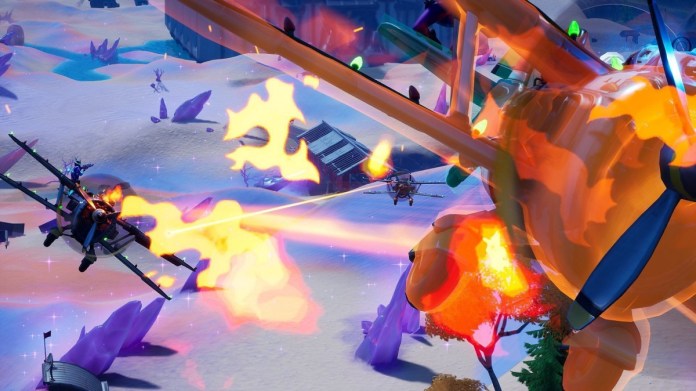 Update 22.20 brought some more changes including further spread of Chrome across to some favourite locations. It also added some more features and NPCs to meet or fight! One of the features some players may have already noticed are runway platforms floating in different areas.

These platforms obviously clued a lot of us in that biplanes were making a comeback, and when the week 6 quests were leaked it showed challenges relating to those planes! Unfortunately, Fortnite devs had to postpone the unvaulting and release of the biplanes, and instead gave us Crash Pads once more.

Related: How to Earn the Chrome Punk Skin for Free in Fortnite

Planes will be making their comeback though, but it is suggested that they will be arriving once Fortnitemares 2022 finishes in early November. Until then, here is where we believe the planes will be available, at each of the floating runway platforms:

How to Use a Biplane in Fortnite

To use a plane in Fortnite, you enter as you would any other vehicle. It can fit a whole squad, with a seat to spare. It can be flown using the following controls:

That is all you need to know right now about finding and using a biplane in Fortnite Chapter 3 Season 4. When we have more information about when exactly planes are returning, we will update! Meanwhile, check out how to find all Goofy Gravestones in Fortnite Fortnitemares 2022! Good luck.