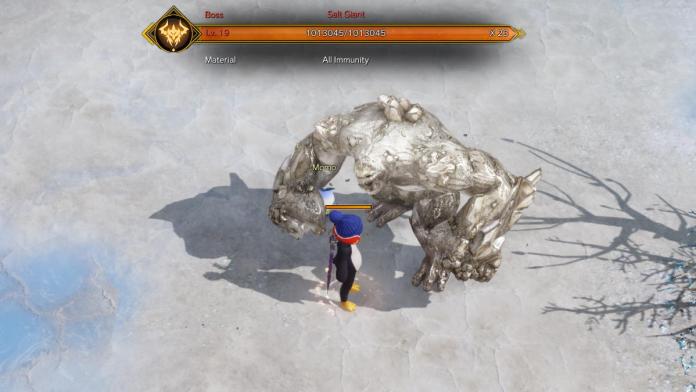 The world of Lost Ark contains many dangerous field bosses, usually one in each zone. These bosses only appear occasionally, and they drop lots of goodies, so it’s worth it to hunt them down. Today, we’ll be looking at the Saland Hill Salt Giant. Let us show you how to find and beat the Saland Salt Giant in Lost Ark!

Locating and Fighting the Saland Salt Giant in Lost Ark

To find the Salt Giant in Lost Ark, you need to head over to Saland Hill, which is nestled in the continent of Yudia. You’ll naturally head through this area if you’re playing Lost Ark for the first time, as all new characters must go through the beginning continent.

Related | How to Get Field Boss Cards in Lost Ark

Head to the approximate area, and look around for the Salt Giant. If you’re close, you should see its HP bar appear at the top of the screen. If you don’t see the Salt Giant, come back in about 10-15 minutes to see if it respawns.

Here’s a small tip: if the Salt Giant has spawned, you should see a large red ring around its area. This ring represents the border of the Salt Giant’s active zone, and if it goes past the border, the Salt Giant will reset and regain all of its HP. Make sure not to fight it too close to the border.

The Salt Giant is a fairly easy and straightforward fight, as to be expected from an early field boss. It has a few basic attacks, and one telegraphed attack where it slams the ground and makes shards fly out. You have a few seconds to get out of the telegraph, so keep your wits about you.

That concludes our guide on how to find and beat the Saland Salt Giant in Lost Ark. If you have any other questions, let us know in the comments below!