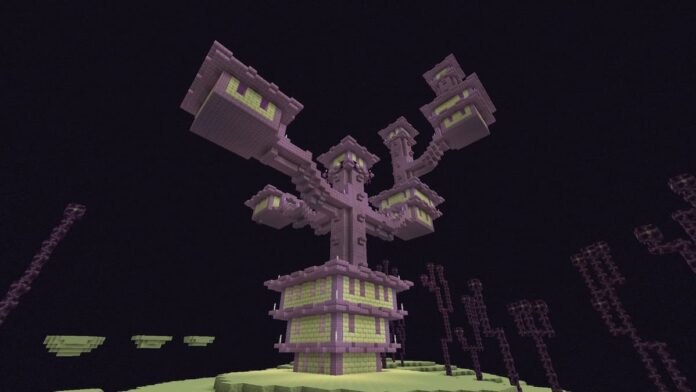 The End realm is the final dimension of Minecraft. Upon entering the end portal for the first time, players spawn on the main island and face the mighty Ender Dragon. After defeating the final boss, the End dimension will become accessible, and the exit portal will open.

Most players return to the Overworld after slaying the Ender Dragon. But there’s much more to explore in the barren floating islands of the End dimension. End cities are rare structures that generate only in the End.

Players can find valuable loot like elytra, diamonds, gold, enchanted gears, and more in end cities. In this Minecraft guide, we talk about beautiful end cities and find them in Minecraft Bedrock.

Related | How to Activate The End Portal in Minecraft

How to Find End City in Minecraft

End cities are tall giant structures exclusively found in the End dimension. Players cannot find the end city on the main island since it generates on the outer end islands. The best way to reach the outer islands is by going through an end gateway.

Once the Ender Dragon is killed, you will find an end gateway, a small structure made out of bedrock blocks, on the main island. The center of this structure is a portal that leads to the outer islands.

After reaching the outer end islands, start exploring islands to find end cities. Players with no luck can use a seed map tool or locate command to find the coordinates to an end city.

How to Find an End City in Minecraft Bedrock