Home Game Guides How to Execute Order 66 in Solar Smash 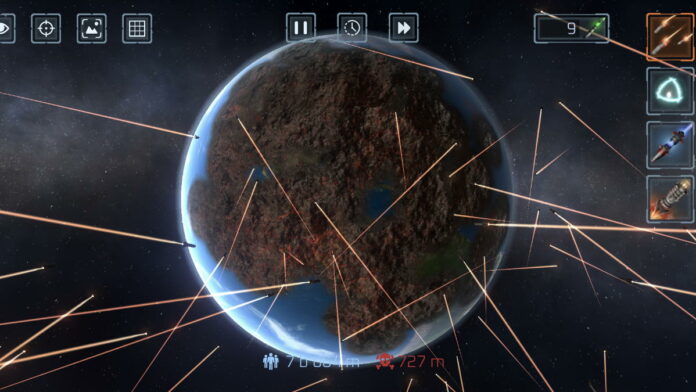 Solar Smash is a physics-based planet simulator where players can terraform planets and galaxies, using a variety of tools including missiles, lasers, drills, and even cosmic entities! The game also features a lot of hidden achievements, and one of them is a direct reference to the popular Star Wars meme “Execute Order 66”. Today, we’ll show you how to execute order 66 in Solar Smash!

How to Execute Order 66 in Solar Smash

In order to get the secret Execute Order 66 achievement, you need to completely obliterate a planet using a massive missile barrage. To do this, tap on the missiles button on the right side, then tap on the top icon with three missiles. Tap on the cog that appears in the bottom right corner, and you’ll see two settings: missile power (top option) and missile amount (bottom option).

The missile power doesn’t matter, but for the amount of missiles, you’ll want to set it to exactly 66 missiles. You’re all set, so go ahead and tap on the planet to launch your missile barrage. You should see the achievement notification pop up shortly.

For those unfamiliar with the Star Wars universe, “Execute Order 66” is a line from Chancellor Palpatine, one of the main antagonists of Star Wars Episode III: Revenge of the Sith. Near the climax of the film, Palpatine gives this order to his army of clone troopers, which commands them to gun down their Jedi allies, destroying the Jedi Order in the process.

This shocking moment is one of the most memorable parts of Star Wars Episode III, but it also became a meme within the fandom due to its implied plot impact. If a movie or game references Order 66, it’s usually associated with massive destruction or betrayal. As you can see, Solar Smash is no different, as you need to nuke a planet into oblivion using a ton of missiles. Talk about overkill!

That concludes our guide on getting the “execute order 66” achievement in Solar Smash. Are you a fan of Star Wars? If so, did you get a kick out of this secret achievement? Let us know in the comments below!

How to Execute Order 66 in Solar Smash