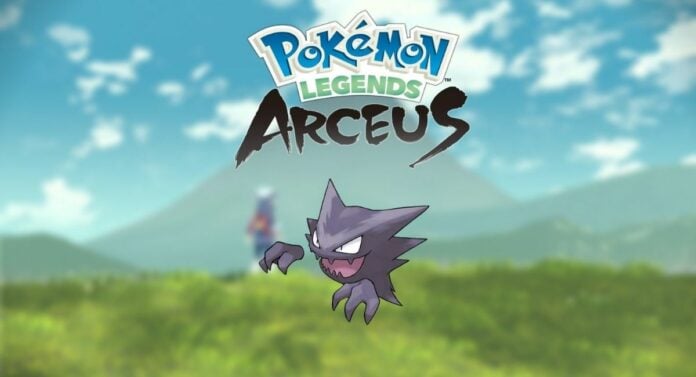 One of the action role-playing Pokémon games from the eighth generation of the Pokémon video game series, Pokémon Legends: Arceus, features a plethora of Pokémon that you can collect and evolve using an evolution item.

Related | What Does the Linking Cord Do in Pokemon Legends Arceus? – Answered

Among the list of Pokémon, we have one called Haunter—a Ghost and Poison-type Pokémon that you can catch at night time during Mass Outbreaks event.

Even after players manage to get hold of Haunter, they don’t know how to evolve it to its higher variant.

To help such players out, we have prepared a handy guide that shares details on how to evolve Haunter in Pokémon Legends: Arceus.

How to Evolve Haunter into Gengar

In Pokémon Legends: Arceus, you can evolve Haunter into Gengar by using the Linking Cable evolution item. Once you use the said item of Haunter, it will evolve into its higher evolution variant, which is Gengar.

Related | Where to Buy Evolution Items in Pokemon Legends: Arceus

You can buy Evolution items from the Jubilife Village trading post. The Evolution items are available in exchange for Merit Points, aka MP, that you can get by collecting and returning Lost Satchels found all around the game map.

To buy the Linking Cable to evolve Haunter into Gengar, head to Jubilife Village and talk to the NPC named Simona at the Trading Post. You can use the above map screenshot to locate the Jubilife Trading post in case you are having a hard time finding it.

How to Evolve Haunter in Pokémon Legends: Arceus