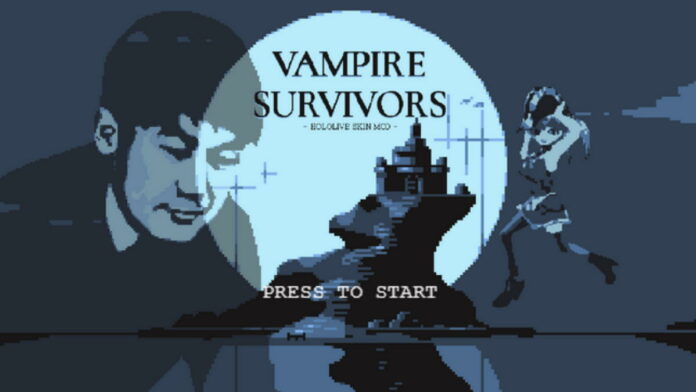 Vampire Survivors is an indie roguelike shooter inspired by Konami’s Castlevania series. Though relatively small in scope, the game has enjoyed much success thanks to its simple yet addictive game play. It was only a matter of time when the big streamers caught wind of it, only furthering its popularity, with Hololive being one of the biggest groups. Today, we’ll show you how to download Vampire Survivors Hololive mod!

If you’re unfamiliar with Hololive, it’s a group of virtual YouTubers that do Let’s Play and variety-type videos. If you also don’t know what a virtual YouTuber is, it’s a YouTuber that uses a virtual character avatar instead of their own face.

Hololive was created by the Japanese entertainment group Cover Corporation, established in 2016. They’ve since gone on to become popular across the world, with a big fan base forming overseas. Hololive consists of several characters, and if you’re familiar, you probably have a favorite.

Now that Vampire Survivors’ mod scene is getting bigger, it was only inevitable that someone was going to make a Hololive mod! The Hololive mod was created by a fan named MayoNeyo, and you can check out their Twitter account here.

Now, we’ll show you how to download the Vampire Survivors Hololive mod. MayoNeyo created a helpful Google Doc that contains the download link, and installation instructions. The instructions come in Korean, English, and Japanese, so just scroll down until you see relevant instructions.

First off, you need to make sure you’re running the v0.5.205 or earlier version of the game, which can be confirmed on the title screen of Vampire Survivors. Secondly, to be safe, make sure to back up your original save file.

Installation is simple, as all you need to do is extract the skin mod folder from the downloaded zip file, then put it inside the game’s installation directory. Your game should now be modded, so enjoy!

That concludes our guide on how to download the Vampire Survivors Hololive mod. If you have any other questions, let us know in the comments below!