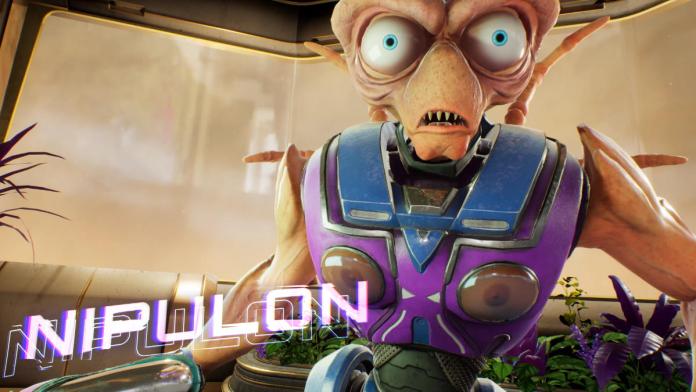 The last G3 Cartel leader you must face in High on Life is Nipulon, the chief of customer liaisons. As one of the biggest G3 leaders, second only to Garmantuous himself, Nipulon operates an illegal drug lounge where clients can come in and enjoy any alien drug they want. Today, we’ll show you how to defeat Nipulon in our High on Life boss fight guide!

Once you reach the top of Nipulon’s lounge, you’ll meet Helen again. Since you keep killing her bosses, she has to find new jobs! After a brief respite, Helen will let you into Nipulon’s office.

Inside the office, Nipulon will greet you briefly, then immediately attack, starting the boss fight. There’s nothing much to do here besides blast him with your strongest stuff, so go all out! Take cover behind the furniture if you need a breather.

Once you drop Nipulon’s health bar to about 70%, he’ll release a purple hallucinogenic haze into the air. This causes you to have a bad trip through your psyche, and you’ll have to work out some inner demons in order to get back to reality.

You’ll end up in a familiar city with an even more familiar face nearby. Go up to the bench and talk to Gene, and he’ll discuss some concerns with you. You have some dialogue options here, but none of them are wrong, so pick whatever you like.

After you’re done talking to Gene, he’ll disappear, and a giant hole will form. Look for the bright pillar of light—that’s where the hole is. Once you find it, jump in!

You’ll find yourself floating in a neon void, where Nipulon appears and taunts you. Eventually, he’ll clone himself and try to confuse you, but stay vigilant—the real Nipulon’s bright orange skin tone will stand out from the fake clones, so look for that one and shoot it.

Related | What is High On Life ESRB? Answered

Once you drop Nipulon’s health bar to around 40%, he’ll send you into another dream. This time, you’ll find yourself amidst the ruins of your house, with Lizzie nearby. Talk to Lizzie, and just like the conversation with Gene, there are no wrong answers.

Once you’re done working things out with Lizzie, another hole will form with another pillar of light. Jump into the hole to start the next part.

You’re back in the neon void, and Nipulon will once again make a bunch of clones. They’ll rotate as one big ball, firing lasers off. The real Nipulon is once again the one with his normal orange skin, but make sure to shoot the clones that are about to hit you with their lasers.

At about 10% health, Nipulon will throw you into one final dream world. You’ll lose all of your Gatlians, so search around the immediate area and recover them, one by one. Once you recover all of them, head into the hole that opens.

You’ll be transported back to the office’s hallway, wielding all four Gatlians at the same time! In one final last ditch effort, Nipulon will flood the hallway with clones, so blast them all down with your new and improved firepower!

Reach the end of the hallway, and finish off the real Nipulon with Knifey, bringing an end to the trip. Congratulations, you’ve defeated the penultimate G3 Cartel leader!

That concludes our boss fight guide on how to defeat Nipulon in High on Life. If you have any other tips or questions, let us know in the comments below!

How to Defeat Nipulon in High on Life – Boss Fight Guide