Home Guides How to Defeat Khezu in Monster Hunter Rise 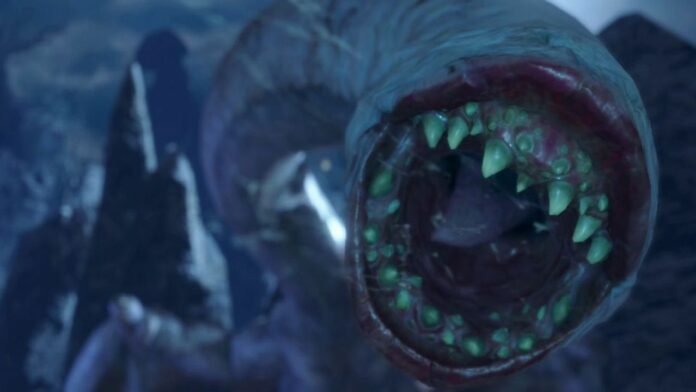 Monster Hunter Rise features a lot of different monsters to take down, but not all of them will require every trick in the hunter’s book to take down. Among these monsters that look fearsome, but are not a major threat, is Khezu, a monster that long-time fans of the series should recognize.

Here’s everything you need to know about Khezu to defeat it easily.

Khezu is now a veteran monster of the Monster Hunter series, having appeared in the very first entry in the game as well as in subsequent games. This Flying Wyvern comes with a very fearsome design, but you shouldn’t let appearances deceive you, as it is not a particularly difficult monster to take down.

Khezu is weak against fire, so you need to make sure you have the means of dealing fire damage before starting the fight. Hitting the monster’s head with fire-based attacks will let you deal tons of damage to it, speeding up the fight in the process.

Khezu likes to roar quite often during the fight, which will end up interrupting any attack you are performing. To prevent something so annoying from happening, you should bring the Earplugs skill with you to mitigate damage and prevent getting interrupted so often.

Slow and Steady Wins the Race

Outside of the annoying roars, the Khezu can interrupt your attacks often with the Discharge Attack, which goes off extremely quickly. As such, you should avoid overextending yourself when you find an opening, and do not launch into attacks that have long animations or recovery times, as you may end up eating a lot of damage. Do not take huge risks, and you should be fine.

The Khezu’s most annoying attacks, not counting its roars, are its Electric Breath Attack and the already mentioned Discharge Attack that deal thunder damage and have a chance of inflicting paralysis. As such, you definitely want to come prepared with the right equipment to protect against thunder damage and paralysis status effects.

In case you like to live dangerously, and you are not afraid of a little thunder here and there, there is a way to weaken the Khezu’s electric attacks. As the monster clings to walls to prepare the attacks, go after it using Wiredash and attack it to knock it down and reduce the electricity attacks’ power.