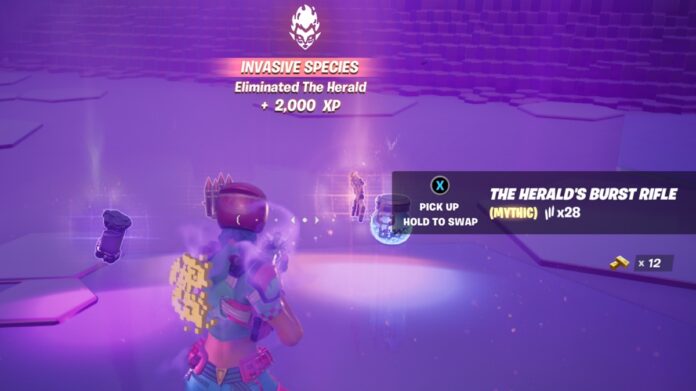 Defeating the Herald in Fortnite

Defeating the Herald is a challenge on its own, but it is also one of the tasks given to players for part 1 of the Paradise Quests. This means no one can move onto the next Paradise Quest until they have managed to defeat the Herald and gained her mythical weapon Herald’s Burst Rifle.

The Herald is a relatively new character introduced as a boss battle AI in Chapter 3 Season 4. She hangs out at Herald’s Sanctum and will attack any player on sight. During battle she sends out 2 chrome wolves to fight the attacking player, while she protects herself with a shield bubble. When dormant she can be seen looking into an orb that projects an image of the Reality Tree.

To defeat her, you must ensure you have loaded up with weapons and healing items first, plus materials if you are in no-build mode. We recommend grabbing EvoChrome weapons from around Herald’s Sanctum. These weapons can be upgraded as you fight Herald and her wolves, and help you deal more damage as you go.

Herald can also teleport so be ready to back away, and build protective walls if you are in build-mode. She is not the best shot with her burst rifle but the shots that do hit will do a lot of damage. Make sure you heal up away from her line of fire or her chrome wolves, and do not lose any HP to the wolves. They are pretty easy to eliminate.

Related: How to Obtain the Chromebrella in Fortnite

We also recommend fighting Herald as the storm moves in– just ensure it is the first storm phase so you only take 1-tick of damage. She takes damage from the storm just like any player so that can help speed up the fight a little. Just make sure you hit her to cause most damage, and you will get the accolade for eliminating her.

When she has been eliminated, grab any healing items she drops, and her mythical Herald’s Burst Rifle, and get to safety! Heal up as soon as you can, and then start defeating the rest of the lobby with your powerful loot!

That is it for hints and tips on defeating the Herald in Fortnite. If you have any more tips, leave them in the comments below. Meanwhile, check out other quests you can complete to earn XP and level up quick. Good luck.

How to Defeat Herald in Fortnite Chapter 3 Season 4