Home Guides How to Defeat Almudron in Monster Hunter Rise 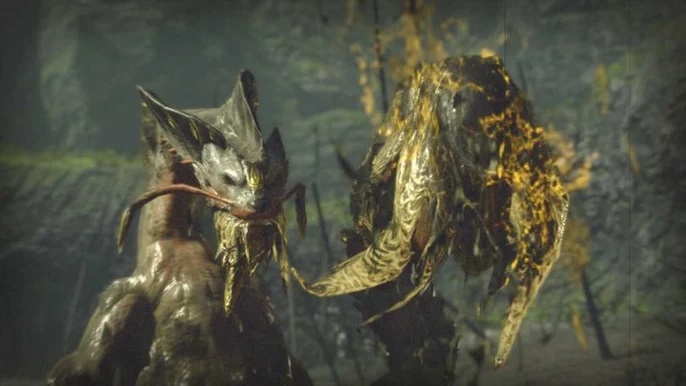 Monster Hunter Rise features a vast selection of monsters to take down, but they are not crated the same. Some of these are complete pushovers, while a few others will give you a run for their money, as they can, and will, put up a fight once confronted.

Among these hard to defeat monsters is Almudron, a fearsome monster that dwells in mud and can use it to its advantage to kill any hunter who is not prepared enough for such a hard fight.

Almudron is one of those monsters in Monster Hunter Rise that will invoke fear into your heart as soon as you lay your eyes on it. Dwelling in muddy areas, this monster is always oozing a golden fluid whose color intensity changes depending on its current state of mind. With its extremely powerful attacks with a wide range that can also cause Waterblight, Almudron is definitely among the most powerful monsters in Monster Hunter Rise.

Where To Find Almudron

Almudron can be found in three different maps: the Shrine Ruins, the Sandy Plains and the Flooded Forest. In the Shrine Ruins, it is found in Areas 9, 10 and 13; in Sandy Plains, it can be spotted in Areas 5 and 7; in the Flooded Forest, it can be found in Area 7. Do note that monsters move around from their starting areas, so you may have to check out nearby areas in case you cannot find the monster in its starting area.

How To Defeat Almudron

Almudron is a pretty big monster, so positioning is key during battle. As most of its attacks start from either the head or tail, you should always try to position yourself behind its hind legs, as this position lets you deal damage while letting you avoid most attacks with ease.

When you cannot position yourself this way, you should always try to stay on the Mud Platforms produced by some of Almudron’s attacks. Here, you can launch air attacks and avoid the waves of mud the monster unleashes every now and then.

If either of the above positions is unavailable, it’s likely that Almudron has unleashed some of its most powerful attacks like Mud Rush and Mud Pillar Assault. In this case, Almudron should be in its half-submerged state that leaves its head and tail exposed. Position yourself between tail and forelegs to deal damage as safely as possible. To avoid letting Almudron’s Tail Attacks deal max damage, you should also destroy the monster’s Mud Ball. Doing so will also knock it down, leaving it defenseless temporarily.

A final piece of advice for fighting and taking down Almudron is to bring as many Nulberries as possible. Since Almudron can deal Waterblight, you will need to heal it as quickly as possible, as, without proper stamina restoration, you have little to no change in beating the monster.