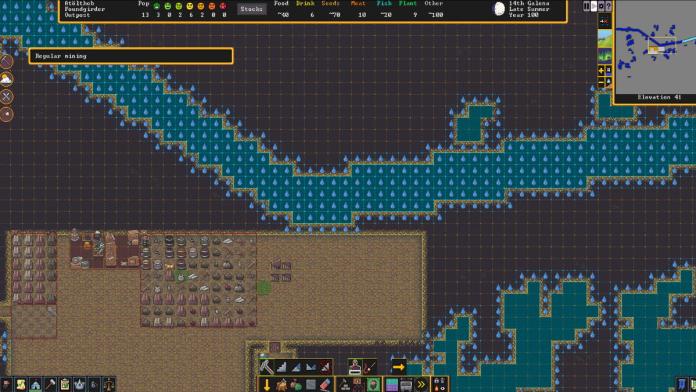 In Dwarf Fortress, you and your Dwarves venture out into the wilderness in hopes of building their own Mountainhome. This means you’ll need to gather resources, build structures, dig underground, and of course strike the earth.

One of the many naturally occurring obstacles you’ll encounter underground are Aquifers, underground rocks that continuously create water. Today, we’ll show you how to deal with Light Aquifers in Dwarf Fortress!

You’ll be spending a lot of time mining out cavern walls, as you’re going to need more and more space as your colony grows. There will be underground rivers and lakes, of which you need to be careful of, lest your underground tunnels start flooding.

Normally, you can usually see a body of water underground if they’re large enough, but what if they’re too small? Let us introduce Aquifers, which are small rocks that constantly spew out water if you break them.

Aquifers are listed on the world map when you’re looking for a place to embark to, which can help you pinpoint a location to start building in.

Aquifers cannot be seen until you try to dig through them. If you’re digging around on the same elevation and you hit an Aquifer, a damp tile is revealed, and your Dwarf will stop mining. If you’re digging downward, a similar thing will happen where the tile below you is marked and the job is stopped.

Be warned: If you dig into an Aquifer from below, there will be no warning and water will immediately start flooding into the staircase! In addition to that, digging rooms out beneath an Aquifer will slowly leak water below.

So, obviously, constant water is definitely a dangerous thing, so here are some tidbits you should know. Aquifers come in two types: Light and Heavy.

Light Aquifers are the most common, and once broken, they’ll produce water at a pretty slow rate. Heavy Aquifers, on the other hand, spew out water at an alarming rate, which can get out of hand real fast. Thankfully, they’re much rarer than Light Aquifers.

Light Aquifers aren’t too much of a threat, since they produce water so slowly. An easy way to deal with them is to dig some space into the Aquifer, then put some walls down to block the water from flowing into your staircase or work area.

Related | How to Get Greaves in Dwarf Fortress

Although Light Aquifers are slow like we mentioned, you should still work swiftly just to be safe. Water will eventually start seeping into your room, so just use your closest materials to build your walls, and that should be the end of the Light Aquifer.

Because of the dampness and water, your Dwarves will stop the job on their own, so you’ll have to keep issuing jobs repeatedly until you get your walls dug out.

For the more intuitive Dwarves, you can actually take advantage of Light Aquifers. If you’re a designer, you can use the infinite water to create a cool waterfall.

If you’re looking for a more practical approach, you can use Aquifers as an underground fresh water source. When you find an Aquifer, dig out a small room on the elevation above it. Dig a downward ramp, and build a Well for some easy-to-reach water.

That just about covers the most important stuff you need to know about Light Aquifers. We hope this guide show you how to deal with Light Aquifers in Dwarf Fortress, and if you have any other tips or questions, let us know in the comments below!

How to Deal With Light Aquifers in Dwarf Fortress