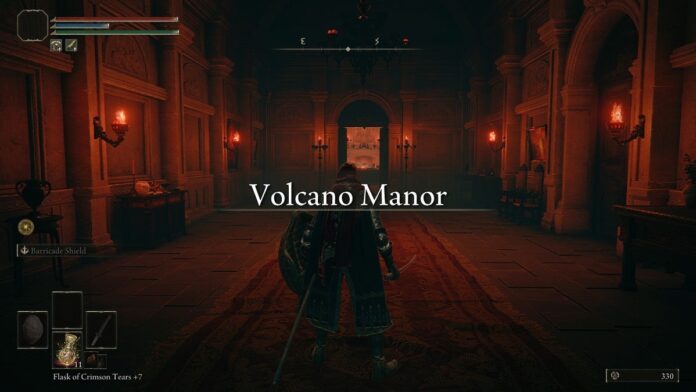 The Soulsborne games are known for their difficulty level and Elden Ring is no exception. One of the more challenging areas in the game is the Volcano Manor, and this is how to complete it.

Once the player reaches Volcano Manor, they are free to explore it as they wish. Upon exploring the manor, the player would eventually stumble across a large room with a Site of Grace behind a table in the centre of the room. Interact with the Site of Grace and then talk to the NPC.

The NPC asks you to join Volcano Manor. Upon agreeing, she will give the player the Drawing Room Key. Take the key and head out into the hallway. In the second room on the left, a couple more NPCs will be there. Upon talking to them, the player will be given the Letter from Volcano Manor.

Take the letter and return it to the first NPC. She will give players a contract to complete in Limgrave.

The first Contract Kill is Old Knight Istvan. He waits to the east of Stormveil Castle and under the outer wall leading to the Divine Tower of Limgrave. Upon getting to the spot, a Red Summon Sign should be there. Interact with it to invade Old Knight Istvan’s world and kill him.

After killing him, return back to the NPC and the player will be rewarded with the Magma Shot skill. After this, heading straight down the right corridor will lead to another Letter from Volcano Manor that leads to another Contract Kill.

The second target is Rileigh the Idle. Residing in the Atlus Plateau, just south of the Bridge of Iniquity, the summoning sign can be found down the cliff. The only real concern in this fight is the build up of Scarlet Rot; just don’t let that meter fill up!

After killing Rileigh, follow the same process to get a reward and pick up the final letter from the other room. Only this time, it is a Red Letter.

The final target is Juno Hoslow. Now, since Juno is located in the Mountaintops of the Giants, this quest cannot be done before fighting through a slew of bosses first:

After beating them, return to the Mountaintops via the Ancient Snow Valley Ruins waypoint. This time, the Red Summoning sign will be in front of the Shack of the Lofty.

Compared to the other two targets, Juno Hoslow is a very simple enemy. This is in part because of all of the difficult enemies the player would have faced before this point and also because the player’s levels would be high enough. Upon beating Juno, players will receive the Hoslow’s Armor set for beating them and finish the Volcano Manor quest.

How to Complete Volcano Manor in Elden Ring on Steam Deck