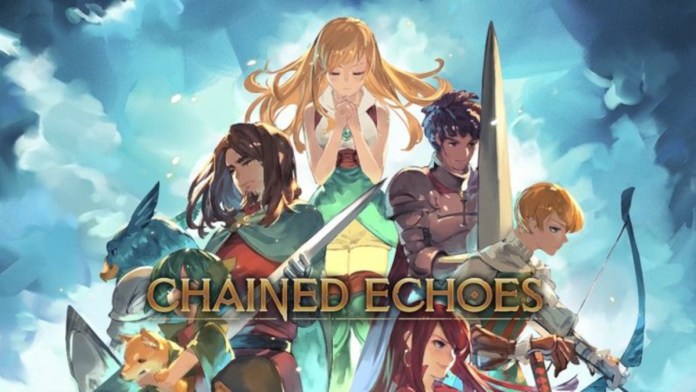 On this page, you can find all the information that you need to know in order to complete “A Goblin’s Dilemma” side quest in Chained Echoes. We break it down step by step, so you won’t have troubles completing the quest. Read more below.

*You may begin this quest after you have returned to Hermit’s Isle and taken command of Glenn again.

You’ll find a goblin bound to a tree near the top of the waterfalls that flow into the lake (it is located in the center of the Rohlan Fields). Bark claims that he is not a goblin. After being untied, he will stutter madly as he rushes to Basil.

Follow the goblin all the way to Basil. Even though you won’t find it, you’ll come across a villager scrutinizing some claw prints on the ground. Earlier in the game, there were several clues of a monster running around the Rohlan Fields. It is now time to obtain some answers on that. Next, Lenne will start talking about Jan.

Pay a visit to Jan’s residence, which is situated on the east side of the Seaside Village. When you enter, you’ll find Basil residents accusing Jan of the attacks, as well as Jan’s daughter Marsia peering through the window. Then you observe a swarm of goblins fleeing the scene outdoors. The village elder will give you the Goblin’s Crest and asks if you can solve their problem.

The Fast Travel Crystal may be found in the Ograne Grottos; from there, go north and take the first road on the right. Following this path will bring you to the Goblin Village, where the sentry will let you in if you’re wearing a Goblin Crest. A merchant may be found in the northwest part of the settlement. There are only three things he’ll sell you:

After you purchase the human language, the goblin in the northeast will tell you that he lost a key somewhere in the mushroom field to the northwest, close to the merchant. There are three places that you need to look:

The Goblin chief is at the big tent to the north, which is where you must go next. Once the dialogs are over, follow Jan back to his house at Seaside Village. There, you will be meet by a goblin and you have two choices. It doesn’t really matter which one you are going to choose, even though the story will slightly change depending on your answer. Regardless of your choice, you’ll end up in a battle against two Goblin Wizards and three Goblin Knights.

Go to the mine cart tracks in Rockbottom (located in the Kortana Mountain Range). Follow the north path all the way until you get on an elevator which will take you to Wygrand Mines. From there, go to the east until you find a door. Use the Miner’s Key to unlock it. Battle your way through the goblins until you reach the second elevator. Get the Darkness Tablet and move towards the goblins’ shrine. You have again two options: Set it on fire and wipe all the goblins, or let it be and spare them.

Depending on your choice, the story again will play out differently. If you spare them, once you get back to Jan’s house, Jan will give you two repair kits, two platinum ores and an elixir.