Home Game Guides How to Complete a Bounty in Fortnite 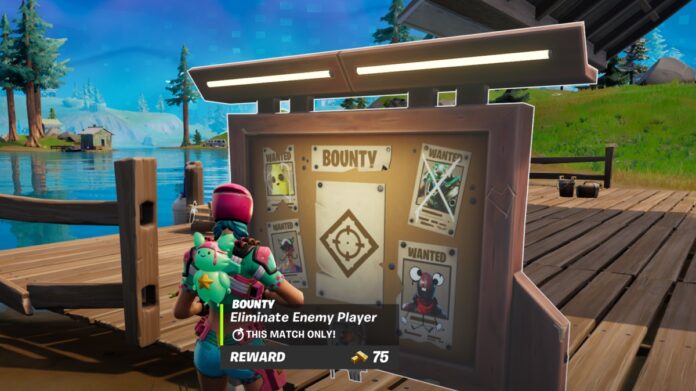 Completing a bounty in Fortnite Chapter 3 Season 2 is a great way to gain Gold Bars which can then be spent on services, upgrades, and items from Vending Machines and NPCs. The Bounty Boards were first introduced in Fortnite Chapter 2 Season 5 where they could be obtained from either an NPC or a Bounty Board. In Chapter 3 Season 2, however, Bounty Boards are the only was players can accept a Bounty to win Gold Bars. Check out our guide below to find out how to complete a bounty during this season of Fortnite.

Players can complete a bounty by finding one of the 29 Bounty Boards dotted around the map. There is a Bounty Board places in every named location except Command Cavern and Tilted Towers. A Bounty Board can also be found in every single Seven Outpost spot.

Begin the bounty by approaching the Bounty Board and interacting with it, and accepting a bounty.

You will then have 6 minutes to find and eliminate the target before another player poaches them.

A yellow circle will appear on the map- this tells you the area where the target is positioned. Over time this circle becomes smaller, giving you more of a chance to find the target.

Sometimes a target can be poached by another player- you will still receive Gold Bars but it will be a fraction of what you would have won if you had reached your target first.

When you find and eliminate the target you will receive 75 Gold Bars for your trouble.

How to Complete a Bounty in Fortnite