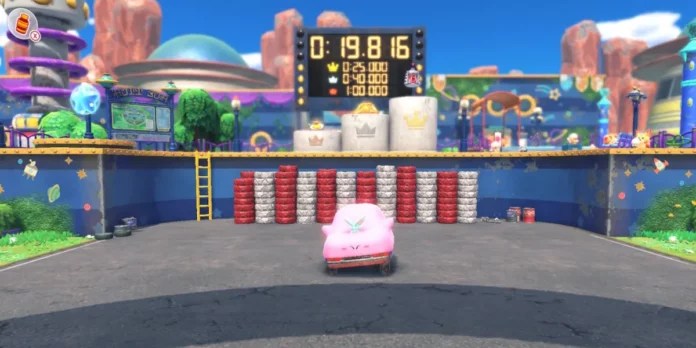 The Kirby series has hit massive levels of popularity over the years due to its fun gameplay mechanics and quirky characters. Today, we will be talking about one of the locations in the game, namely the Circuit Speedway.

Circuit Speedway is a stage in Kirby and the Forgotten Land’s Wondaria Remains area. In this stage, there are a total of 5 missions to complete:

The final mission has been giving some players trouble, which is why we are here to help.

The first race in Circuit Speedway is at the very beginning of the stage. Completing it in under 20 seconds will complete one mission and save the first Waddle Dee.

The second Waddle Dee is behind a secret door, blocked by a gate, which can be activated by hitting a switch to open the gate. The invincibility candy can also be acquired here.

From here, rush back and through the next door ahead, then up the stairs to trigger the mini-boss battle with Wild Edge. Defeating it while still invincible will trigger this quest completion.

After defeating Wild Edge, open the chest just beyond it to get the Gigant Sword Blueprint. Also, proceeding right in the corridor with the door will lead to a small opening behind some grass, where there is a hidden third Waddle Dee.

For the next race, instead of following the track, just jump off the right side and use the cardboard shortcuts. Finishing the race in under 50 seconds will yield the final Waddle Dee and complete the final mission.

How to Clear Circuit Speedway in Kirby and the Forgotten Land