Home Guides How to Become a Police Officer in Sneaky Sasquatch 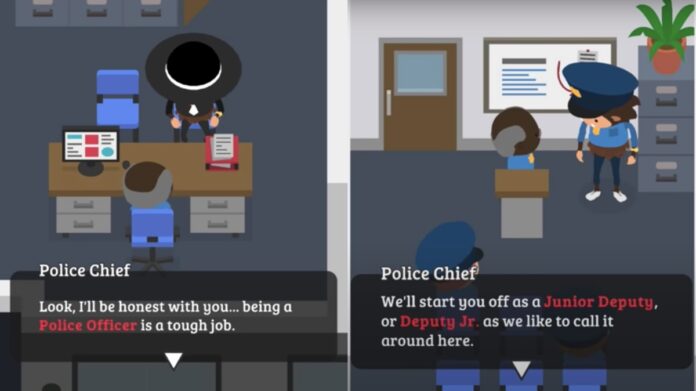 Becoming a police officer in Sneaky Sasquatch is one of the main storyline quests. When you complete the quest you will receive a promotion to sergeant and you get to keep the police uniform. Warning there are spoilers for the main storyline below so if you have not yet finished the first 2 main quests, do not continue!

To become a police officer you must first complete the first two main quests:

After completing the first two quests you will wake up in your cabin and Racoon will meet you outside with an emergency. The lake has been contaminated! The Park Ranger speaks to a police officer but they say that they are too short-staffed to be able to do anything except file a report. The next day you should head over to the station and go to the second floor for your interview. The Chief of Police is not very welcoming but they are clearly desperate for help so they hire you that day. You are told you won’t be paid but you can take the money from the fines you receive from any Violation Tickets issued.

Related: Sneaky Sasqautch: How to Become a Ferry Captain

You start off on Highway Patrol as a Junior Deputy using the Police Computer to issue the tickets. After issuing a number of tickets you will be promoted to Deputy and sent on an assignment to catch speeding cars. To get to the next promotion you will have to upgrade your police car at the garage so it will be fast enough to catch the speedsters with your Speed Radar. After you have issued enough speeding tickets you will be promoted again to Officer and sent out to find drivers with ‘unsecured hood cargo’. Once enough tickets are issued you are called back to the station and promoted to Detective. At last, you can investigate what is poisoning the lake! Go grab your scuba diving gear (or purchase it from the island if you do not have it already) and get investigating.

Once this quest is complete you can finish being a police officer and keep the uniform.

Sneaky Sasquatch is available to play via Apple Arcade.

How to Become a Police Officer in Sneaky Sasquatch