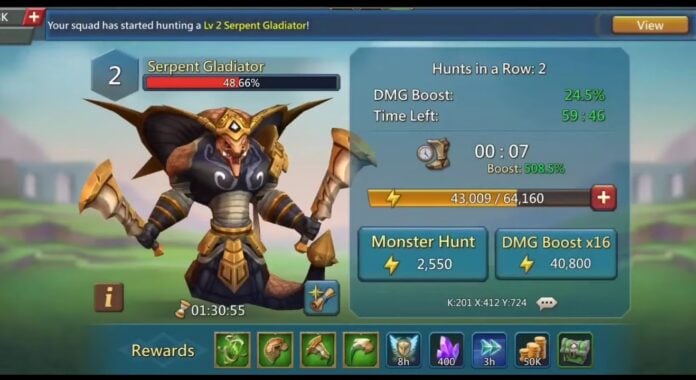 Lords Mobile is an exciting real-time strategy game for mobile devices. Players fight each other in an exciting battle between two armies. To win you need to upgrade your kingdom and hire new units. The game also has many different activities, such as hunting monsters. And in this guide, we want to talk about Serpent Gladiator.

How to Beat Serpent Gladiator

The Serpent Gladiator is one of the monsters that players can regularly defeat. During the monster cycle, the Serpent Gladiator will spawn for two days. It disappears after about 2 hours and 55 minutes or after it is defeated. It is important to understand that it is impossible to create a universal team of heroes for hunting monsters.

Serpent Gladiator deals massive physical damage and also has a high defense against physical attacks. Moreover, it will deal primary damage to one target and additional damage to nearby heroes. Therefore, to defeat him, you will need healers and wizards. Two teams are very effective against Serpent Gladiator.

RELATED: How to Get More Free Gryphon Chests in Lords Mobile

And the second team for free to play players:

Using these heroes, you can easily beat Serpent Gladiator. For defeating this monster, you will be able to receive various rewards. The quality of the rewards will depend on the monster’s level. Here is a list of all rewards:

How to Beat Serpent Gladiator in Lords Mobile