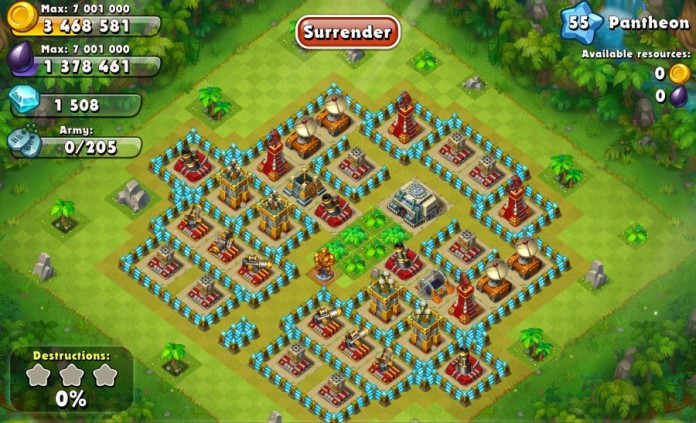 The first real challenge when it came to Jungle Heat single player missions was the Pantheon – the first really difficult base that took some real planning and major troops to beat. I first managed to get just one star (enough for me at that time), but I decided to come back with better troops and see if I can win it. I did, so I’ve decided to share with you a guide on how to beat the Pantheon mission in Jungle Heat.

Since you probably don’t care too much about the number of start gained as long as you manage to get past it, we’ll start with how I won Pantheon with 1 star:

Basically, I just trained Pyro and Bombs. 6 bombs were enough, the rest pyro. I launched them all at the top of the base, where the two Jerichos and Flame Throwers are and they managed to last long enough to destroy the base. That was all I wanted.

But eventually, I decided to come back and win the Pantheon mission in Jungle Heat, and I did it in style, with the help of my fellow clan mates too. Here’s how it went:

I trained 10 Gunners, 4 Iron Storms (lvl 1), 2 choppers and 10 Bombs. I also got my clan troops filled with high level pyro from my clan mates. I had to move quickly as I started my attack near the Gold statue inside the base: 5 gunners to each side, then 2 Iron storms. Quickly, I launched a few bombs to break the walls nearby. I launched the other 2 Iron Storms and then the rest of the bombs. Finally, I placed the pyro from my clan and the choppers. Victory and complete satisfaction, for a price. But it was well worth it.

Hopefully this guide on how to beat the Pantheon mission in Jungle Heat will help you get past this great obstacle and carry on to unlock the Huntress hero. Did you manage to win the base with a different strategy? Let us know by commenting below. 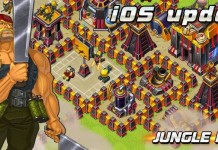 How to Get Tornado Hero in Jungle Heat 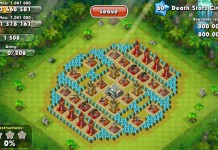 Guide: How to Beat Death Stars Citadel in Jungle Heat