Home Game Guides How to Beat Kulve Taroth in Under Twenty Minutes in Monster Hunter... 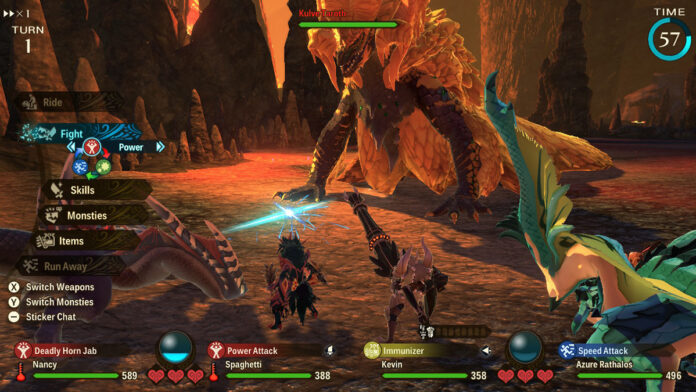 Kulve Taroth is a new monster added in Monster Hunter Stories 2: Wings of Ruin’s second free title update. Unlike many of the game’s monsters, it’s impossible to get a Kulve Taroth egg and hatch one as a monstie of your own. Instead, it’s fought as a boss in the timed co-op quest “The Goddess of Gold.”

Defeating Kulve Taroth will give you access to the weapons and armor crafted from the materials it drops, but the quest rewards themselves are also very worthwhile. Particularly, an SR ticket is the reward for finishing “The Goddess of Gold” in under 20 minutes, which is actually a fairly challenging time constraint even for experienced players.

Here are some general rules and tips for completing Kulve Taroth’s quest as quickly as possible:

On the two paths leading to Kulve Taroth at the far end of the dungeon are an Astalos and a Brachydios. Beating both of these is required for finishing the quest. As mentioned earlier, the monstie skill deadly horn jab is easily the best way to deal with them, as it can potentially defeat them on the first turn. If you choose not to go that route, their weaknesses and attack patterns are as follows:

Unlike the other monsters, deadly horn jab won’t work against Kulve Taroth, so you’ll have to beat it the old-fashioned way. Its weaknesses and attack patterns in the first phase are as follows:

Once you beat it in the first phase, it scurries off to the back of the cavern. Kulve Taroth’s weaknesses will change at this point and so will its attack patterns; here’s a list of these for phase two:

It’s probably best to bring at least one weapon for each phase. The Kirin Bolt Maximus, Thunderlord Hammer and Zephra Wingbeat are all good options for phase one. For phase two, the Noble Ana Palas, Elderfrost Oppressor, Elderfrost Mauler and Sonorous Eisfyl work well.

For armor, the Boltreaver Armor+ is a good all-around option. The Hellblade Armor+ gives strong fire resistance as well as Tenacity if you aren’t getting it from a talisman. If you want a more offensive approach, you can use Kirin U Armor+ for Ice Boost (XL) or Kirin Armor+ for Thunder Boost (XL).

That should be all you need to know to beat Kulve Taroth in under 20 minutes and get a free SR ticket. The ticket reward isn’t repeatable, so you’ll only be able to get it once, but it’s well worth it to do so. Happy hunting!

How to Beat Kulve Taroth in Under Twenty Minutes in Monster Hunter Stories 2: Wings of Ruin