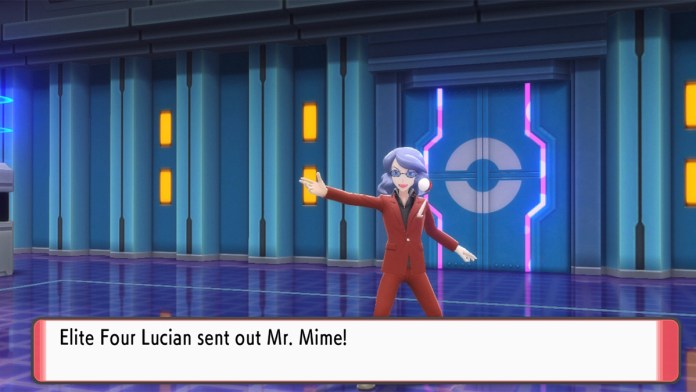 As a member of the Sinnoh Elite Four, Lucian poses quite a challenge in Brilliant Diamond and Shining Pearl. Lucian is a specialist in psychic type Pokemon, but in spite of all of his Pokemon sharing this type, their weaknesses vary quite a bit. Since there’s no catch-all counter, let’s take an in-depth look at how to actually beat Lucian!

Mr. Mime is Lucian’s lead. While it’s not a powerful Pokemon on the offensive side, Mr. Mime provides a lot of utility for Lucian’s team. Chiefly, it holds a Light Clay item and can use both Reflect and Light Screen. If it manages to use one of these moves, either your physical or special damage will be halved for the next eight turns!

As such, you want to take this thing out as quickly as possible. Fairy typing allows Mr. Mime to shed psychic’s usual weaknesses to bug and dark attacks, so you’ll want to use poison, ghost or steel attacks to deal super effective damage. Be mindful that psychic moves are super-effective against poison Pokemon, however!

Beyond its rare typing, Lucian’s Girafarig also uses Trick Room, which reverses the order of turns, making faster Pokemon go last. It can also use Thunderbolt as a coverage move, so watch out for that if you’re using Pokemon like Honchkrow or Vespiquen as counters.

Medicham is a straightforward offensive powerhouse. Pure power raises its attack to huge levels, while Zen Headbutt, High Jump Kick, Thunder Punch and Ice Punch give it a lot of different coverage options. Its fighting typing means dark attacks will do average damage and it can hit back for a lot with High Jump Kick.

This leaves ghost, flying and fairy as its weaknesses, with the latter two coming from its fighting subtyping.

Lucian’s Alakazam uses a pretty powerful setup set utilizing Nasty Plot to double its special attack after a single use. It also uses a Life Orb to add even more damage. This lets Psychic and Shock Wave hit like a truck if you give it a chance to prepare.

The trick is simply not to give it a chance to do anything. Alakazam is pretty fast, but its defenses are pitiful. If it nasty plots the first turn, make sure you can knock it out before it turns that giant special attack stat on you.

Bronzong is actually a bit easier to defeat than in the original games, since its steel typing no longer resists ghost and dark moves. Considering that it has levitate, making it immune to ground attacks, Bronzong is weak to ghost, dark and fire attacks.

That said, Bronzong is surprisingly bulky, so it may take several hits to take down. It also has Payback to punish Ghost attackers, so be mindful of that.

So What Pokemon are Best for Beating Lucian?

Even though at least one of his Pokemon isn’t weak to each of them, bug, dark and ghost Pokemon excel here. Drapion in particular is a pretty solid choice since it can use dark moves while not being weak to fighting, fairy or psychic moves. Mismagius is another good option since only Bronzong can hit it for super-effective damage.

If you’re struggling with other members of the Sinnoh Elite Four, check out our comprehensive guide here!