Home Game Guides How to Beat Blackwing in Lords Mobile 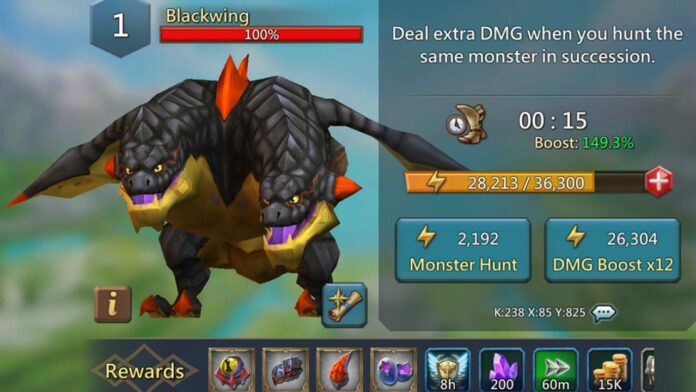 There are many different strategy games for mobile devices. And Lords Mobile is one of the most popular. All thanks to the fact that this game is very diverse. Basically, the players will, of course, build their kingdoms and fight each other, but there are also other activities, such as hunting monsters. And in this guide, we want to tell you about Blackwing.

How to Beat Blackwing

When hunting monsters, the right team is key to winning. The thing is that all monsters have their strengths and weaknesses, and Blackwing is no exception.

This monster is a normal type. This means that during the monster cycle, it appears for two days. Blackwing is on the map for 2 hours and 55 minutes, after which it disappears. After defeating, it will also disappear and respawn in a new location.

Blackwing looks like a two-headed wyvern. The monster deals magic damage and also has incredibly resistant to any magic attacks. Therefore, the only option to defeat it is to assemble a team with huge physical damage. Let’s start with the paid heroes team for levels 1-3:

For level 4 you will need to replace Tracker and Scarlet Bolt with Death Archer and Rose Knight. For level 5, the team would be next:

RELATED: Where to Recruit and Join Guilds in Lords Mobile

As for Blackwing level 5, you will have to change the team a lot:

How to Beat Blackwing in Lords Mobile