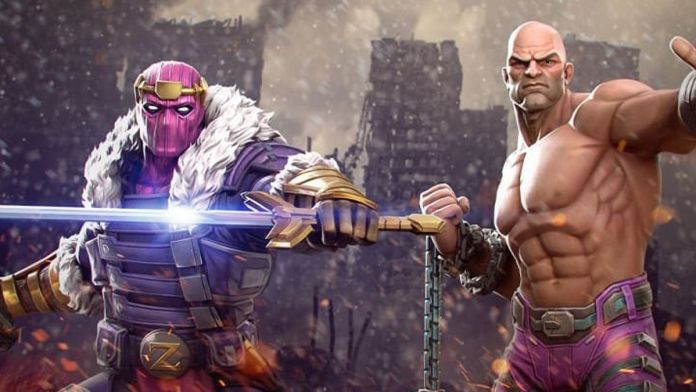 Strategies to Beat Absorbing Man in Marvel Contest of Champions

As soon as the fight begins, Absorbing Man will gain three buffs: Black Uru Form, Regeneration, and Precision. This makes him deal pretty heavy burst damage, regenerate health over time, and become immune to bleed and shock effects. Absorbing Man is a huge pain in the butt to take down, so here are some strategies.

To beat Absorbing Man, you first need to understand how he works. His gimmick is that he has different forms, and whenever he uses a special move, he’ll activate a form. The form he gains depends on what special he uses; SP1 grants Black Uru Form, while SP2 grants Magma Form.

For his event fight, Absorbing Man has the Recurring Nightmare buff, which means that you’ll most likely only see him use SP1. This means that he’ll be going into his Black Uru Form often.

If Absorbing Man performs a special attack while his form is still active, the form’s duration will refresh, and it will become refined, which makes it stronger. If Black Uru is refined, Absorbing Man can land critical hits and damage bursts through blocking! Basically, you don’t want this to happen.

There’s one important detail to this: If Absorbing Man is hit by a heavy attack when he’s recovering from using a special attack, his current form is deactivated. This deactivation effect can happen every 20 seconds.

Consistently punishing his SP1 is the key to victory, as you want to get him out of form as quick as possible. No matter what your approach is to Absorbing Man’s fight, learning how to punish his SP1 is essential.

Related | How to Change Teams in Marvel Contest of Champions

Immediately after the ball toss, Absorbing Man will shoulder tackle forward a moderate distance. Watch your spacing, and try to dodge back through the charge to activate Dexterity, then quickly follow up with a heavy attack as he’s recovering.

If you’re successful, you’ll land a nice hit on Absorbing Man, and more importantly you’ll knock him out of his current form. This will make the fight much more manageable, if only for a few seconds. That’s OK, as you can remove his form as many times as you need to.

Now, let’s talk about that annoying regeneration. One of the most popular ways to deal with is to use a Champion with Heal Block, which disables regenerative abilities. This is a great way to cripple his strength.

Most Tech Champions have the Heal Block ability. If you don’t have too many Tech Champions, you can also try a Champion with Power Lock, which is also very effective. Absorbing Man won’t be able to use specials, so he won’t get any crazy regeneration.

Another popular method is to inflict Absorbing Man with lots of poison. Poison deals damage over time, and deals more damage when enemies use their special attacks. Poison also greatly reduces regeneration effects, which is the most important aspect.

Here are some popular Champion choices for Absorbing Man’s fight:

That concludes our guide on how to beat Absorbing Man in Marvel Contest of Champions. The fight is tough, so don’t give up! Have any favorites strategies that work really well against Absorbing Man? Let us know in the comments below!

How to Beat Absorbing Man in Marvel Contest of Champions