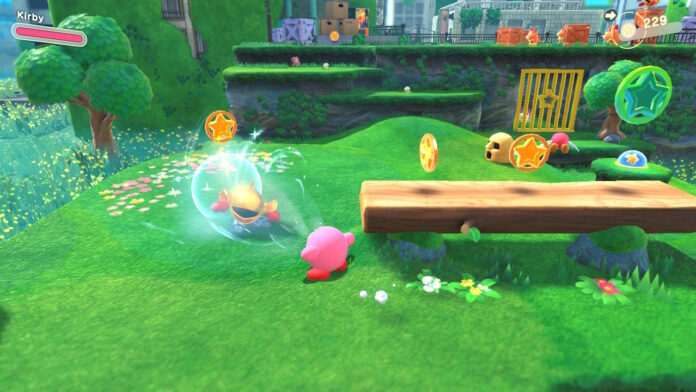 Kirby is one of the most iconic Nintendo characters ever, having starred in a lot of different games as well as being one of the characters that have always appeared in the Super Smash Bros. series.

The character’s popularity is sure to get even higher thanks to Kirby and the Forgotten Land, an excellent 3D platform game where the character returns with all of his iconic abilities, including the one that allows him to copy the special abilities of his enemies.

So, how does Kirby’s Copy Ability work in the latest entry in the series? Let’s find out.

How Does Kirby’s Copy Ability Work in Kirby and the Forgotten Land?

Kirby’s Copy Ability in Kirby and the Forgotten Land doesn’t work too differently from how it did in previous games starring the character. By inhaling certain enemies, Kirby can copy their abilities and use a variety of combat techniques that are not accessible otherwise.

When you see an unusual and weapon-wielding enemy, press and hold the B to make Kirby inhale in the direction he is facing. If you inhale a special enemy whose ability can be copied, Kirby’s appearance will change to match that of the ability he has copied, and he will gain some special abilities.

Once you have activated a Copy Ability, you will be able to use different combat techniques by pressing the B button. Try holding the button or pressing it in the air to unleash different techniques that could be quite helpful for getting out of a sticky situation.