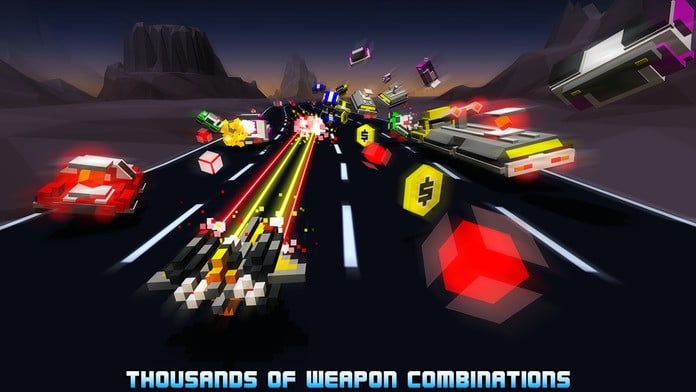 Hovercraft: Takedown is an absolutely amazing game and I’ve had a real blast playing it! I am sure you’re having a ton of fun wreaking havoc on the roads, destroying vehicles and upgrading yours at the same time… it’s absolutely amazing! However, there’s a bit of strategy involved, especially if you want to get better at the game and that’s exactly what I am here to talk about in our complete Hovercraft: Takedown cheats & tips strategy guide, with some advice on how to build the perfect car!

Your skill is indeed what matters the most when playing the game, but you still can use a few guidelines here and there. Read them – they might help! So let’s not waste a single second and let’s check out the Hovercraft: Takedown cheats and tips below!

1. Focus on making money at first
Coins are extremely important, because it’s coins that you need to buy the card packs that give you all sorts of goodies for your vehicle, so focus on them at first. Get as many as possible, ignoring high score and everything else: the more coins, the better, but do have in mind that the longer you go, the more coins you will automatically get.

2. Play with the default cars first
I know that you can’t wait to just jump into creating your own awesome vehicle, but getting a really good one is very difficult and starting with a poorly built one might actually ruin this wonderful game for you. So play a good number of games with the default car, maybe upgrade it a bit and only afterwards jump to creating your own car. This way, you will know what to expect from it and it will be easier for you to build that perfect vehicle.

3. Don’t rush to spend your Upgrade points
I was really lucky to get 200 or 300 Upgrade parts early on in the game, but I didn’t rush to spend them all on my vehicle. The truth is that your first crafted vehicle might actually suck, so you just waste upgrade stuff on it… so try to keep on them! Don’t go with more than three levels in each area, even on the default cars – keep them for later, for when you unlock vehicles with more weapons and overall better stats!

4. Always buy the most expensive card pack
It’s true that it will take slightly longer to get there, but it makes no sense to purchase the 145 card pack, when the next one is way better and a lot cheaper (you get 5 cards for 250 coins as opposed to 2 for 145).

5. How to craft the perfect vehicle
In the end, that’s what it’s all about: crafting your own perfect vehicle in Hovercraft: Takedown, but you probably know already that it’s really difficult to at least build something that works, let alone works well. A lot of trial and error is required, but eventually you will do it. Here is, for example, my first (and current) custom vehicle: 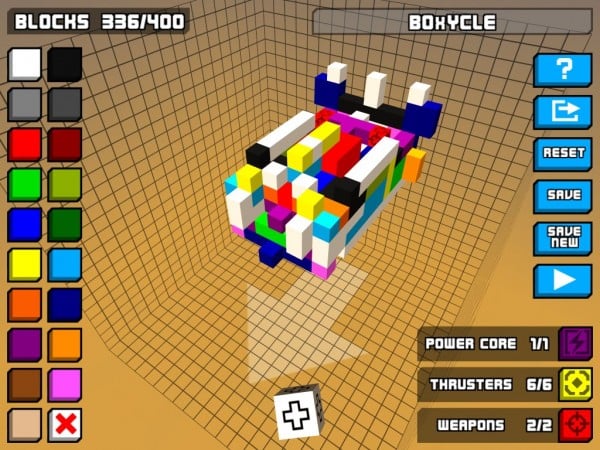 Here are some tips that I learned after tweaking and re-tweaking my vehicle:

– balance is extremely important. Without it, you won’t get too far, so make sure you have a flawlessly balanced car!
– Think about balance after you lose some parts as well: anticipate the stuff you’ll lose on the way and make sure that even after that, your car is still well balanced. I usually get very far with just half of my car left!
– take care of the main things: your power core, the thrusters and your weapons. My power core is at the center of my vehicle and it’s impossible for it to be destroyed by the end. I also made sure to surround all my Thrusters by many blocks, so they’re always safe as well. Finally, the weapons are at the back, safe from incoming debris and enemy fire. A good strategy is to wrap the core inside the thrusters and build your car around that.
– try to go for a compact, box-like version of your car. The more compact it is, the better it will hold.
– try to use as many blocks as possible: the more you have, the more you will survive on the streets if your vehicle is well built.
– don’t give up. You won’t make it from your first try, you probably won’t make it on your 10th either. Keep playing and testing and tweaking until you have that flawless vehicle.
– remember: a good looking vehicle might not always perform best. Do separate vehicles if you just want to get creative.

In case you’re interested, here’s a video of me trying the game for the first time and enjoying it a lot:

Apart from that, it’s mostly taking out the enemies one by one, driving carefully and avoiding all obstacles, which you will get better at the more you play. It’s fun, so it will be great.

Do you have other tips and tricks for fellow players? Let us know by commenting below!