The overall objective in Hot Lines is to clear the screen of lines. Like a construction worker picking up steel girders, you can only move the ones that don’t have another one on top of them.

In the first couple of stages this is very straightforward once you understand what you’re supposed to be doing, but pretty soon the stages get complicated, with lines turning corners and overlapping other lines in places, while being overlapped in others. 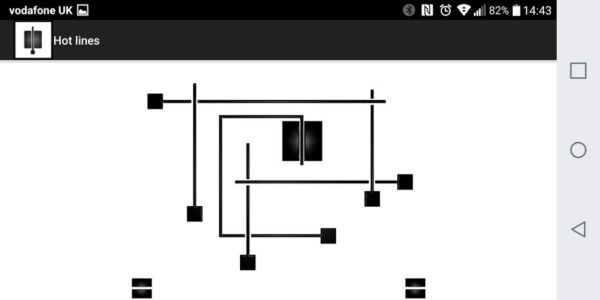 In stage 8 a new mechanic is introduced. One of the lines has a diamond rather than a square on the end of it (there’s also a line with a circle at the end, but you can ignore that for now). This line is broken. You need to clear the lines above it in sequence and then tap on the diamond to rotate the broken section of line into place. Now you can clear it.

The other game element that makes itself known in stage 8 is the block with a groove out of it, visible in the bottom-right of the screen. The significance of this kind of block is that you can’t clear the line protruding from it until you’ve removed any line that might be resting in the groove. So, in the case of stage 8, you have to clear the line along the bottom before you can eliminate the one with the grooved block. 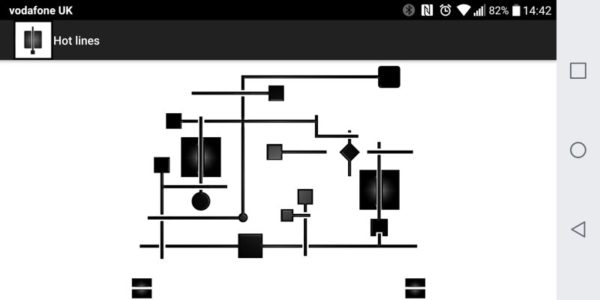 The next new mechanic shows up in stage 10. You’ll notice that there’s a single block sitting just under the tangle of lines. This is where the aforementioned circle-tipped lines come in. It’s only possible to clear a line if the line it’s crossing has the same shape at the end. Towards the end of this level, when it’s time to eliminate the circle-tipped line, tap on the mysterious square at the bottom to turn the circle into a square. 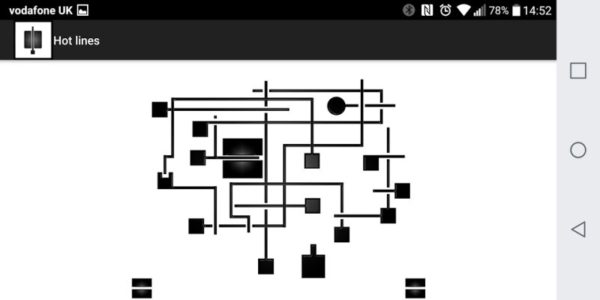 From stage 12 some of the broken lines have circles in the middle rather than diamonds. Don’t worry about this – the difference is purely cosmetic. 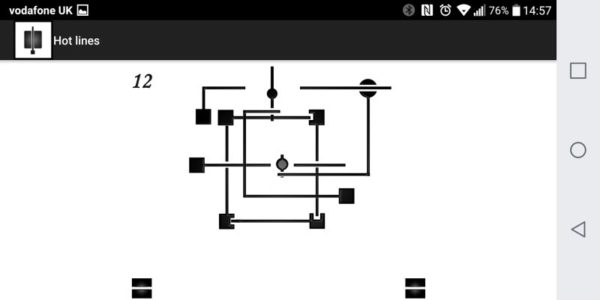 In stage 16 you’ll notice two shapes hanging at the bottom of the screen – a square and a circle. As before, these are for swapping the shapes at the ends of lines to ensure that they match the lines with which they intersect. 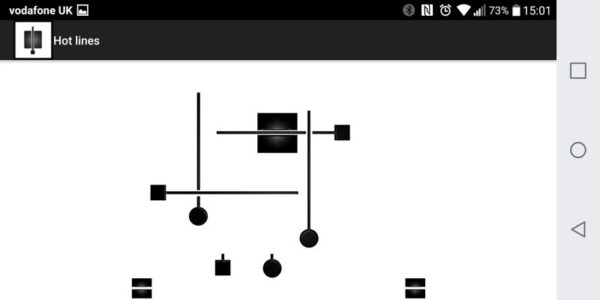 In stage 17 something odd happens. There are two shapes at the bottom of the screen, but they have a new function. These ones clear the lines with the corresponding shapes. 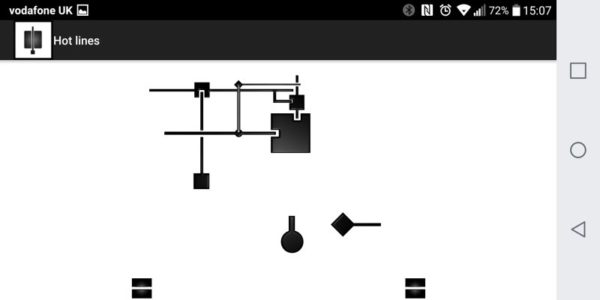 In stage 19, a new shape is introduced – a square with rounded corners. It works just like the other shapes. Diagonal lines are also introduced at this point, but don’t worry – they’re just the same as the other lines, but on a slant. 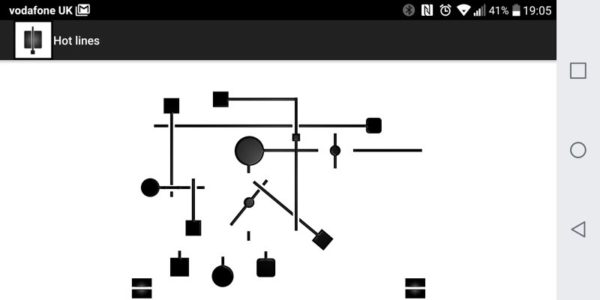 In stage 20, a new object is introduced – a square with lines emanating from two of its edges. Aside from the extra line, it works in the normal way. As long as the lines coming out of it are on top, you can remove it. 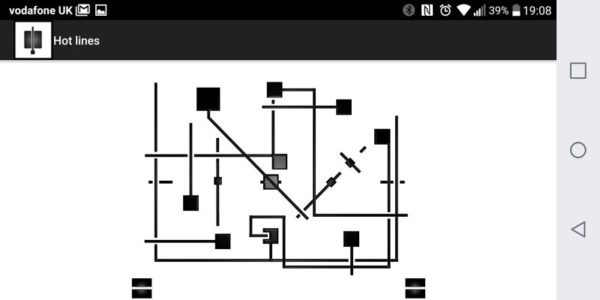 In stage 25 a line appears that overlaps with another line for much of its length. It sits at the top of the jumble of lines, and has a rounded-square at its end on a little perpendicular stub. You can eliminate it even though it seems to be the wrong shape – it crosses a line with a circle at the end. Go figure! 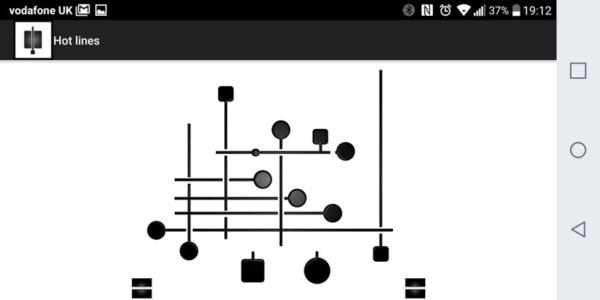 In stage 31 you need to eliminate the vertical pair of rectangles that looks like a chunky ‘=’ sign before you can clear the line at the bottom. 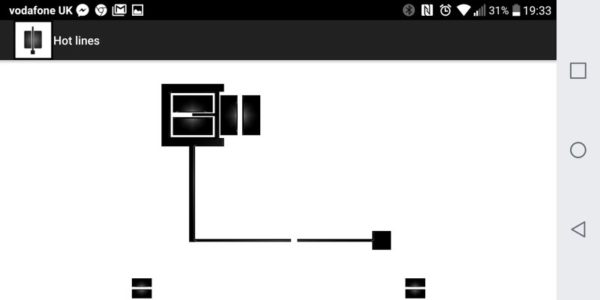 Stage 40 marks the first appearance of a circle that you have to touch to rotate so that the line sticking out of it connects with the rest of its line. 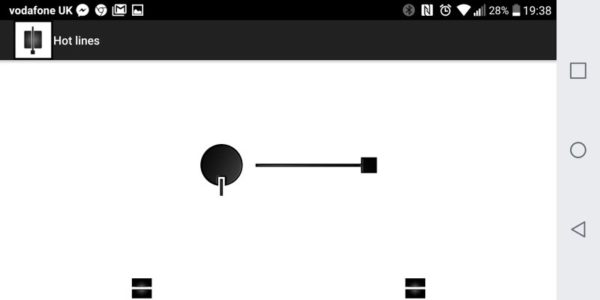 In stage 43 the rotatable circle is joined by a rotatable square with lines sticking out of two edges. 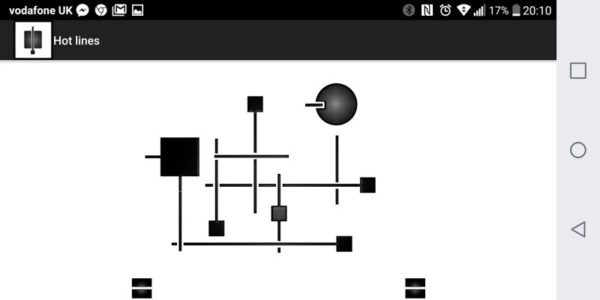 In stage 50 we see for the first time an arrangement of three lines that are rotated together as a unit. This kind of object is signified by a rectangle at the end of a line. 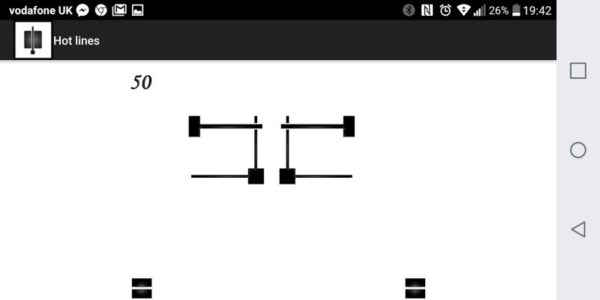 In chapter 52 an extra line is added to the rotatable square, so that it has three little stubs protruding from three edges. Tap it until one of the lines connects with another line. 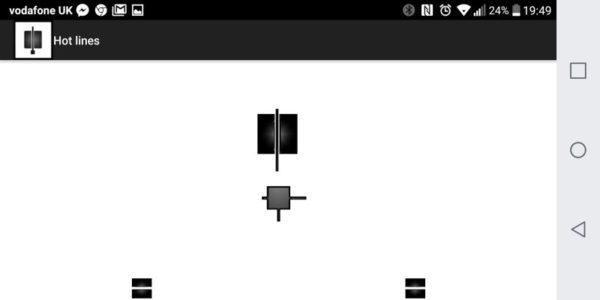 Chapter 56 contains a block with three lines protruding from it. This one works like the others, except you have to tap an icon to rotate it rather than tapping the square itself. 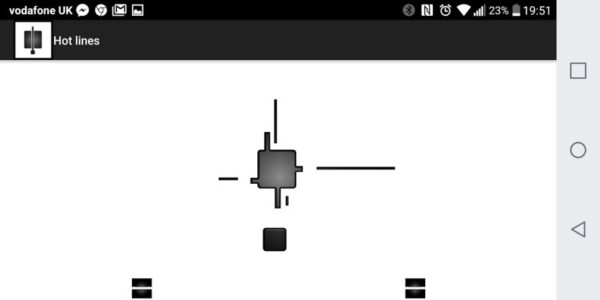 The same kind of block exists in chapter 57, except there are two of them and they rotate in unison. Simply tap the block that connects with the uppermost line, and then move on to rotating the next. 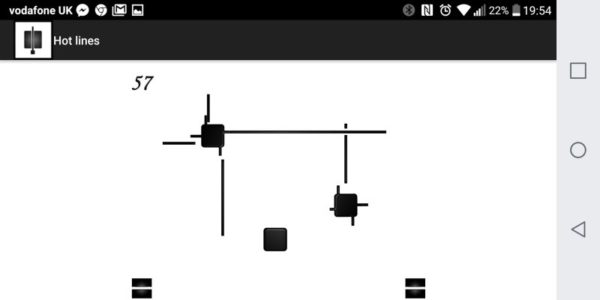 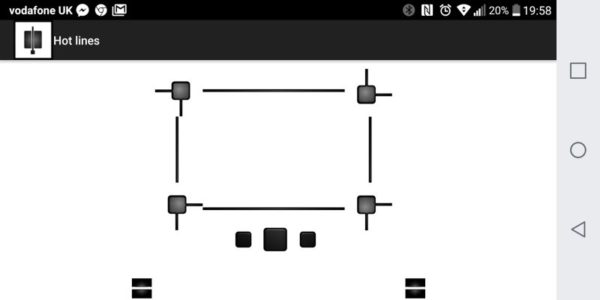 In case you haven’t done so already, you can download Hot Lines on Google Play and the App Store.