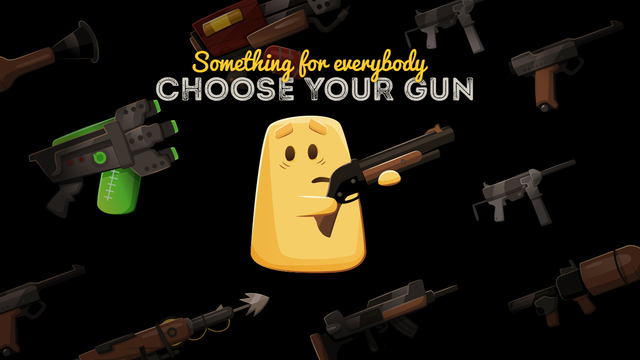 The shotgun is a direct upgrade to the pistol, and it’s next in the gun tree. The shotgun functions much like the pistol, except it fires two angled shots in addition to the regular straight shot. Just be careful not to nick any blobs with it! It’s also a tad bit more powerful than the pistol, but even the toughest monsters will fall to it if you land all three shot. We highly recommend it over the submachine gun!

After you beat the first level, you’ll unlock missions. These are side objectives that you’ll complete naturally as you progress through the game. If you see a red number next to the mission icon, that means you have a mission ready to turn in! Be sure to turn them in as soon as possible so that you get new missions. Each mission that you complete is worth a certain amount of gems, the premium currency of the game, so try to do as many as you can.

3. Pay attention to the signs!

As you travel further and further into the cave, you’ll begin to encounter deadlier monsters. Pay attention the mine tracks – sometimes you’ll see warning signs that will tell you to get ready. If you see exclamation marks or skulls, that means a big monster is about to show up, so get ready to shoot!

In addition to the regular monsters on the track, sometimes you’ll be pestered by flying monsters. Be sure to watch out for white circles that are coming from above you – most of the time they will always be flying monsters. Be careful when you get into a big open area, as they will most likely attack in big groups.

Sometimes you’ll see wooden crates hanging from the tracks above you. They have question marks on them so you don’t know what’s inside until you shoot it. Sometimes they’ll contain coins and sometimes they’ll have blobs! But watch out, you might get monsters too. Don’t rapid fire on them – you might end up accidentally shooting a blob.

When something is out of your light radius, it’ll appear as a white circle until you get closer. Sharp eyes will notice that this will sometimes help you pick out monsters. If you see a white circle that doesn’t start moving, it’s probably a blob. If the circle begins to move before your light radius touches it, it’s probably a monster. Keep your wits about you and get ready to react!

That’s all for Hopeless 2: Cave Escape. If you have any other tips or tricks to share, leave a comment below!