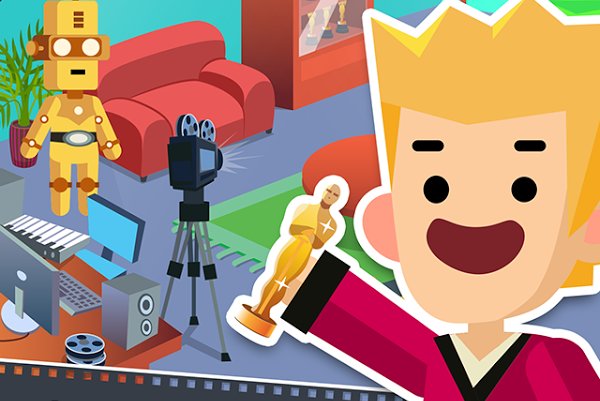 Hollywood Billionaire is anew and addictive clicker type of game for Android. It challenges you to run your own movie studio and create movies that top the box office charts, all while tapping the screen and buying upgrades. It’s more difficult than it sounds, but we’re here to help by sharing some Hollywood Billionaire cheats and tips to unlock everything and release the best movies.

Progress in this game is a bit slower than it is in other similar titles, but this doesn’t make it less fun. With the right purchases and some extra activity, you will get on a roll. And we’re going to share with you all the details on how to do it. So let’s not waste a single second and let’s check out below some Hollywood Billionaire tips and tricks to get the most out of this game!

1. Marketing vs. Studio Equipment
There are two main categories you can purchase stuff from: studio equipment, which increases the revenue from releasing movies and marketing which increases the amount of coins you get per second. Even though it’s Studio Equipment that is cheaper and seems the better option, I would suggest to focus early on on upgrading your Marketing and increasing the amount of revenue you get per second.

The thing with releasing movies is that, even if you manage to nail it with a really popular genre, you will still make just a little for the time you spend waiting for the movie to be ready, compared to the amount you’d get from per second revenue for the same period of time. Marketing also gives you constant revenue, unlike Studio Equipment which only offers a larger boost every time you release a new movie. And you need a lot of money first and a constant flow to buy those upgrades and that is easier to achieve by getting the Marketing upgrades first.

2. Respond to reviews correctly
Reviews are extremely important in Hollywood Billionaire: not only that they can reward you with a nice chunk of money if you react to enough of them correctly, but they also tell you which genre is popular, helping you choose what type of movie to do next. When answering reviews, you don’t really have to read the text: if it’s written in green, then it’s a positive review and you should tap the thumbs up button. If it’s written in red, then hit the red button.

But when you’re closer to completing your movie, you should pay attention to what the people say and notice what genre they demand: that is the popular genre and releasing movies from a popular genre can double the amount of money you get, so it’s really important to release movies that are in high demand.

However, it does seem to be a bit more difficult than it appears: on some occasions, I had the feeling that even though I started the type of movie that was in demand, it didn’t rank really well because the demand changed in the mean time. I am still not sure that this is how the game works, but anyway it’s still better to pay attention to what the audience wants before starting a new project instead of randomly picking a genre and working on it.

3. Tap the screen like crazy
Whenever you have time, spend it tapping on the screen. Although this doesn’t reward you with any money per tap, it does decrease the completion timer for your current movie which is extremely helpful. Make sure to catch the flying cups of coffee and tap the screen with multiple fingers after doing so as that gives you an even better time boost.

4. Watch the ads
Every now and then, you will notice that there’s a guy looking like Steven Spielberg on the top right of the screen. Tap him and watch an advertisement for some goodies: these range from extra money to a really powerful cup of coffee. Make sure to take advantage of this when you’re spending some time in the game!

5. Switch to your house
After a while of playing, you will also unlock your mansion. You can swipe the screen to the left to switch to your mansion and buy upgrades there as well. These basically work like Studio Equipment upgrades, increasing the value of each completed movie. These are a bit more difficult to unlock, but don’t forget to check them out every now and then to boost your earnings more when you have the chance.

6. Use and activate tokens
For every 5 movies you publish, you earn one Token. These Tokens can be spent to unlock special items which offer various boosts to your movies and general performance. Don’t forget to actually activate the boosts you unlock with Tokens after getting them (tap to add the green check mark to them) and do your best to release as many movies as possible to get new Tokens.

After getting a boost, you can also use Tokens to boost it – this usually costs less than getting a new boost. If the boos you have is really good, then do upgrade it. If not, it’s better to save for a few more Tokens and hope for a better one next time.

7. Get Powerups
Premium currency can be slowly gained for free from ads or achievements. You can spend that premium currency on getting power-ups and you should do so to boost your earnings, but my recommendation is to wait a bit before doing it in order to receive more money. Probably after releasing 15-20 movies it would be a good idea to start thinking about spending your premium currency on these Power-ups: there’s nothing else worth spending the Premium Currency on anyways!

8. Complete missions
Missions or tasks are given to you constantly. Once you complete a mission, you receive a new one and they are unskippable. Fortunately, most of them are relatively easy and can be completed fast – make sure you do so because they give you a nice boost to your views (regular currency). Also make sure you collect the reward as no new task will be given unless you collect your reward!

These would be our tips and tricks for Hollywood Billionaire. If you have other suggestions or tips for fellow players, let us know by sharing a comment below!