Did you know that even a hobo can become president and build a multi-million dollar empire? That’s possible in Hobo Simulator, a charming game for mobile that’s about to get better as we’re here to share with you some Hobo Simulator tips and cheats in our complete strategy guide.

Because, yes, even though possible to start with no place to live in and nothing to eat and end up as the richest person on the planet, it’s going to be extremely difficult… and you don’t have more than a lifetime to do it (generally, you’ll see what I mean below). But it can be done and it sure is a fun ride!

So without further ado, here are our Hobo Simulator tips and tricks for you to live a long, prosperous life!

The trash is your friend
You gotta start somewhere and in this case, “somewhere” is the trash bin. Therefore, you will eat a lot from the trash, and also take all the strange pills you can find there. These two things replenish (albeit VERY slowly) your hunger and health respectively. 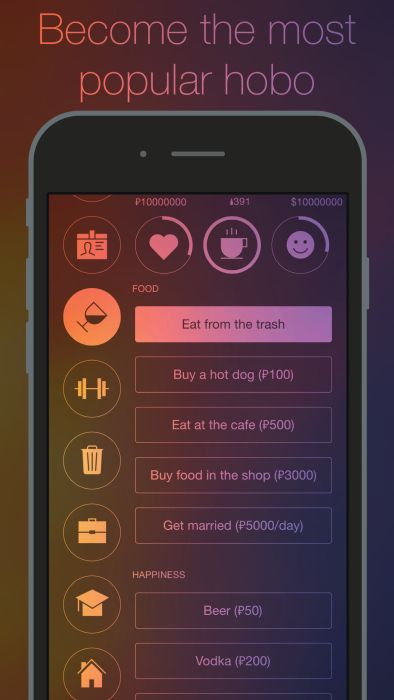 The only stat that can’t be replenished for free is your happiness and the minimum amount you have to spend is 50 pennies to increase it a bit. This means that early on you should micromanage your little money effectively and make sure that you always have enough on hand to buy a beer (although usually it’s good to go for 3 of them in a row to get decent happiness).

So, early on, only spend your money on Happiness replenishments and eat from the trash, then take pills from the trash. Every now and then, when your finances are looking good, you can get the random visit to the witch doctor, the hot dog or the more expensive Vodka (mainly to boost your popularity faster), but don’t risk it – money is difficult to be made early on and you don’t want to die!

Managing money early on
Once you get into a rhythm, things will be a bit easier. But be warned that it takes a lot of time and patience. Here is what you should do early on in order to make sure that you don’t die:

Bum around (by tapping the trash bin button) in random locations. Usually, you get the best rewards in terms of money and bottles from the supermarket, but mix them and randomly tap other locations as well. Things are usually random here, even though “Near the supermarket” yields the best results usually. 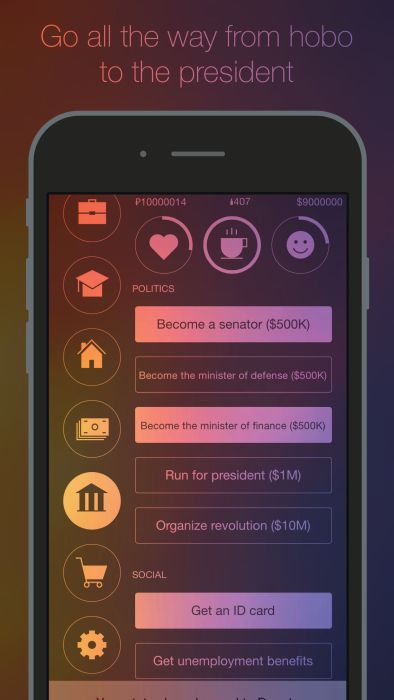 Do this while keeping an eye on your health, hunger and happiness. Once once reaches zero, you have seven days to fix it or else you will die.

Don’t rush to eat from the trash, take a pill from the trash or get a beer, though! For the next 6 days, keep on bumming around: if your happiness is at zero, keep an eye on the funds and make sure you have money for at least 2 beers. If money is not needed (your health or food are at zero), then simply bum around until the last day.

That is when you will get a warning and that’s when you should start working on improving the stat that’s on Zero. Usually, I recommend performing an action to replenish it for 5-6 times in a row, in order to have a decent meter of around 30% – at least. Make sure that you alternate if needed (if two skills are at zero).

This takes time and a bit of practice, but you will see that it’s a little easier once you get the system going, the most important part being that of taking advantage of the 7 free days you have before you die of hunger, low health or boredom… Then rinse and repeat for years: it’s going to be a really slow ride.

Learn arithmetics ASAP
As soon as you have 150 pennies, learn Arithmetics. You will need it to exchange your bottles into money (and later on to exchange pennies into dollars and vice-versa) so it’s a vital skill. This has to be learned ASAP.

Wait for the best exchange rate for bottles (and dollars)
The bottles you collect when you Bum around (or through other means) can be sold and turned into money. However, there is an exchange rate in place, bottles selling for anything between 1 – 4 pennies per bottle.

Check these rates each day and only sell when a bottle is worth 4 pennies, otherwise you’re just making progress a lot slower for you. 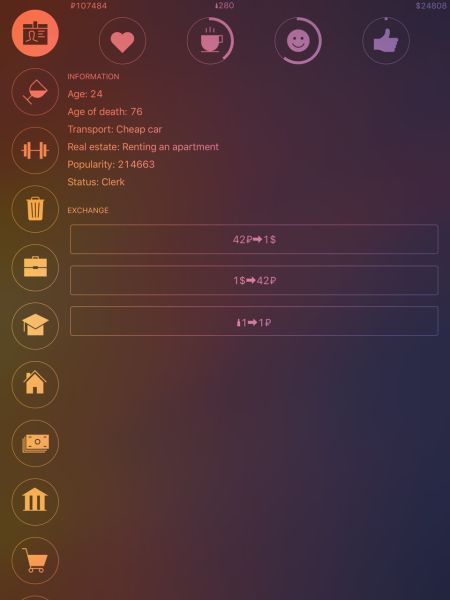 The same goes for dollars. The usual rate is between 40 – 44 pennies per dollar, and you want to do the same here: buy dollars when they’re at 40, and sell them (if you ever need that) when they’re 44.

Your main goal: get the Immortality Pill
If you tap the health button, all the way to the bottom, you have the option to buy an immortality pill. That costs $100 million and it’s extremely difficult to get it – but that should be your main goal: amass a fortune high enough to get it and become immortal.

You will first get the Fortune Teller boost – which will tell you the age when you’ll die. You will basically have until then to get your fortune. And if you don’t like the numbers shown there (if you’re going to live until under 70, for example), you can simply let your character die and start over!

Don’t get married (too soon)!
Getting married isn’t as cool as it sounds. You basically end up paying 5,000 pennies per day in order to keep your hunger level always filled. That is absolutely not worth it, since you can easily keep it in control for a lot less by regularly buying food for yourself.

Plus, getting married is the worst “boost” you can get because if you decide you can’t afford it and you need a divorce, you’ll have to lose 50% of all your money.

The same goes for Getting drunk in a bar (1,000 per day for maximum happiness) and the fitness club or personal trainer. You should only do these if you want to raise the difficulty of the game.

Sometimes, you’ll get lucky – sometimes not
There are few random events in the game that will really affect you, but some are extremely good. This is me winning the lottery early on in life, to my delight: 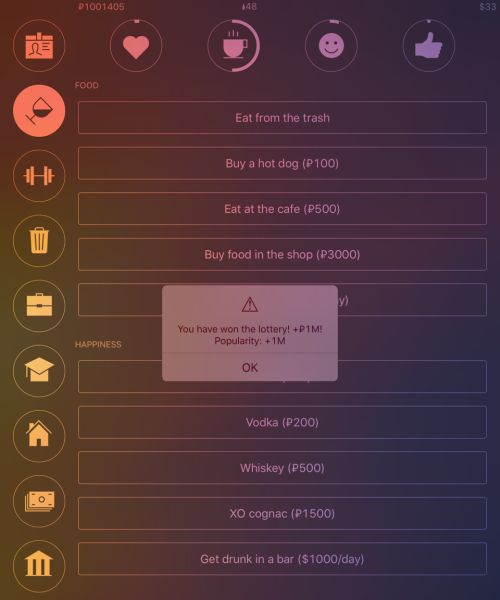 This doesn’t happen often though – and it might never happen during your lifetime. There are bad effects as well: at one point, I upset the local mafia and lost some money and my status as a leader of the hobos. Also, you get some birthday presents each year… and I am sure that there are even more random events in the game. But you have no control over them.

Buy everything in the game, in the allowed order
Because you never know when a bad event happens, your best bet is to start working on your goals one at a time. Hobo Simulator is a game that follows a pretty straight line when it comes to character progression, as you can usually only unlock one new item at a time.

So your goal is to do that: see what’s the next item you can unlock and get the money (or popularity) required to unlock it.

Don’t forget about Social Benefits
If you’re not lucky like I was to win the lottery, you will be allowed to get unemployment benefits or disability benefits from the Social menu. These might give you some money every year, but I am not sure of that… I never spent a full year on benefits.

The easiest one to get is the disability benefit. You will not be able to get a health higher than 50%, but it won’t be cancelled until you choose to cancel it, as opposed to the unemployment benefits which are cancelled if you get a job. So definitely get the disability benefits early on and see if there’s a bonus to be had after one year – daily or monthly bonuses are not offered though…

Money Exchange
Remember when I said that the exchange rate from pennies to dollars and vice-versa fluctuates each day? Yes, it can be anything from 40 to 44 pennies per dollar. This means that if you are to buy $1,000 at 40 pennies, then turn $1,000 into pennies at 44 pennies per dollar, you earn 4,000 pennies (or $100). This is also something that you should constantly do – and increase the amounts as you have more to trade. This is the secret to making the real money in the game and do it as often as possible!

This would be it in terms of Hobo Simulator tips and tricks. If you have any additional suggestions for hobos who want to make it big in life, don’t hesitate to let us know by commenting below.