The Otherworlds – lands of mystery and wonder… and plenty of danger. From seemingly peaceful bamboo groves to underground tombs, there are all sorts of locales that will amaze even the most seasoned traveler.

An ancient diety known as Asurendra summons warriors from different time periods into the Otherworlds. Faced with perilous trials, the warriors must fight to survive and discover the truth behind Asurendra’s summoning…

Otherworld Legends is an fast-paced action brawler for the mobile platform. Choose from a variety of heroes that span across the annals of time and fight against hordes of monsters and mechanisms.

Become an Arthurian knight who fights with the power of light on his side, or play as a young engineer from a future where powered robot suits have become the norm. Each hero has their own unique set of abilities that lead for an interesting and explosive combat experience.

The Otherworlds are randomly generated every run, so no two runs will ever be the same. Collect an assortment of items to boost your power, and fuse them together to create powerful new items. The Otherworlds are full of dangers and surprises, so you will need everything you can get to stand a chance of surviving.

Otherworld Legends is available now on the App Store and Google Play Store.

(This news article was first published on Touch Tap Play) 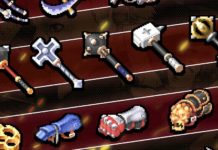