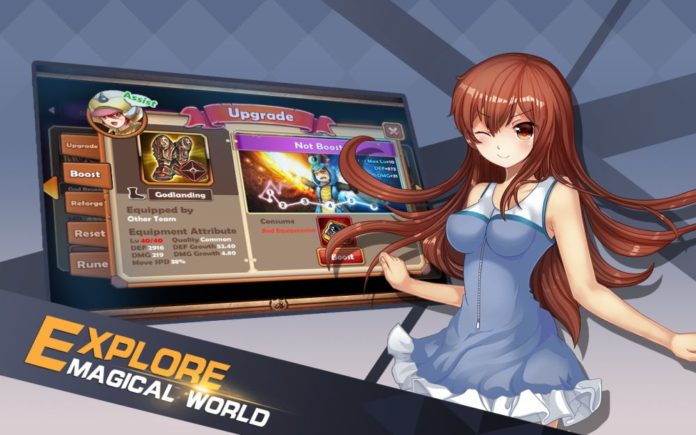 Hero Girls League is an amazing RPG game with even more beautiful female characters to keep you company during a cold night or day. And despite the fact that the Heroes seem to be created to fulfill your secret fantasies instead of accompany you through epic adventures, Hero Girls League is actually extremely complex and challenging. So we have even more reasons to love it!

Today, we’re sharing a complete guide to Hero Girls League: cheats and tips that will help you build a perfect team, win all battles and have tons of fun. Even more than just looking at the beautiful girls that you manage to collect during your play time. So let’s put the game aside for a while and let’s talk some strategy in our Hero Girls League tips and tricks article below!

Always start with an Arena Battle
As soon as you log in to the game, go for an Arena Battle. The reason why I say that you should always do that is the fact that you can only battle in the Arena once every 10 minutes. So if you always start with a battle, there’s a high chance that you will get to battle once again after completing your other task in the game.

Check out all events, missions & goodies
There are a ton of things to do in Hero Girls League: there are always lots of events going on and menus to go through. There’s also a ton of goodies to collect, so make sure that you go through them all each day.

Among the most important that it’s easy to forget about, we have the Daily Wish, the Roast Duck, the Wonderland battles and the free daily summons.

Join a guild ASAP & add friends
Being part of a guild is very important – and even more so being part of an active one. You can contribute to the guild and earn points, which can then be spend in the Guild’s shop for buying all sorts of goodies. You can also research tech in order to boost your Heroes’ stats and take part in Guild battles.

Auto mode is usually pretty smart
When going to battle, you have the option to use the Auto mode. That is usually how I play the game and the AI does a very good job with that. I’ve never actually had any reasons to complain about how the auto mode plays and it does make your life a lot easier. I say that especially because it’s sometimes difficult to keep track of all the lanes and hero effects.

The only thing you have to worry about in Auto mode (in adventures, for example) is to actually activate the superpowers of your Heroes at the right time because the AI doesn’t do that.

Complete the daily quests
A lot of goodies await if you manage to complete enough daily quests – and you should always focus on getting them all done. Simply tap the Quest icon in the main screen and do them one at a time in order to get all the goodies. It’s easy to complete them each day, so why not do it?

Awaken vs Evolution vs Leveling Up and Overstepping
The leveling up of your heroes seems a bit complicated, since there are so many things that you can do. All the options above go for each of the heroes, but the good news is that everything is a lot easier than it sounds. You just have to know what each thing does and do everything right.

Leveling up & overstepping: this is the basic thing to do. You level up your heroes by consuming items that you gain from battles or other means. Once the maximum level is reached, you get the chance to Overstep your hero (needing different items and money) which basically allows you to level them up even more.

Awakening a hero: This is another process that you can go through in order to better your heroes. This one is usually done using special items called Dawn Stars and Gold, but every now and then, you will need to sacrifice a specific hero in order to evolve your selected one. 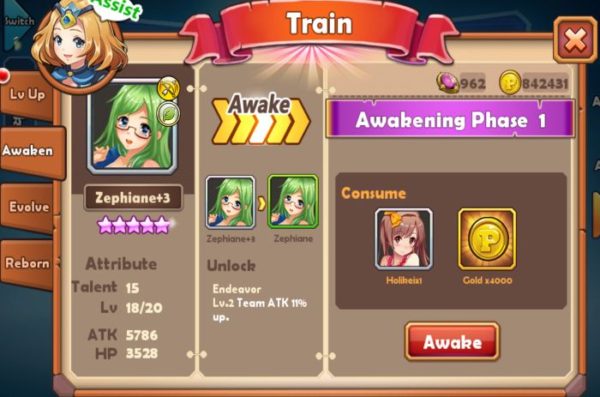 Apart from giving you Attack and HP boosts, Awakening enough times also unlocks special passive skills or upgrades existing ones, so it’s worth doing as often as possible on your top heroes.

Evolution of a hero: Evolving a hero is the most difficult thing to do since you need to meet specific requirements AND have enough Grass Stone for that. This also gives you a boost of stats, as well as level up your skills or unlock new ones.

As a golden rule of thumb, I would suggest against focusing on investing too much in 3 star and even 4 star heroes. It won’t be long until you will be able to create a great team of 5+ star heroes which will make the lower star ones obsolete.

However, if you did invest items into your heroes, you can reset them from the Hero menu using the Reborn option. It costs premium currency to do so, but you get your items back and you can use them to level up your better heroes, so it’s definitely worth doing.

Hero Bonding
Each hero has a set of other heroes that they bond with. This means that if your team has Heroes that bond, they will get various special bonuses. The interesting thing about the heroes is that you can assign other heroes to them in order to increase their bonding chances: 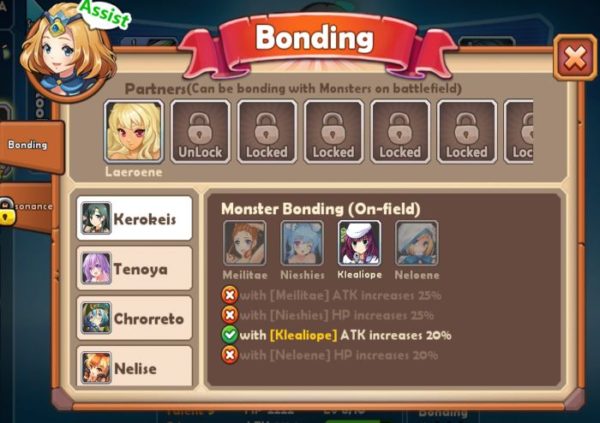 As you can see in the screenshot above, the assigned hero is actually adding their own set of bonding into the mix. The downside is that you can’t use or sacrifice that hero… but it might be worth it under the right circumstances.

Sacrifice Heroes for Pokesouls
I know that the lady heroes in this game are so charming that you don’t really want to give them away, but if you want to get better in the long run, you unfortunately have to. This means that you have to sacrifice some heroes in order to get Pokesouls, which in return can be exchanged for hero pieces or other goodies.

It’s usually an easy bet to sacrifice your 3-star heroes as they are useless in the long run. 4 star heroes will become useless too. But always, when sacrificing, make sure that you don’t need any of the heroes that you are sacrificing for combinations in order to get some of the top heroes.

Check out the Wiki for more boosts!
I stayed a way from the Wiki for a long time, thinking that it has extra tips and tricks. However, that’s a great place to earn even more goodies from Hero Girls League! You can create sets there in order to get various boosts: from sets of Heroes, to sets of equipment and so on, there are a ton of options you should check out there as well.

Level up the equipment & enchant it
I didn’t really take advantage of this feature, but it’s extremely helpful. You can level up your Equipment by tapping it in the Hero menu where it’s equipped. This is definitely something worth doing – and something I wasn’t aware I could do, so I spent a lot of time fighting with level 1 equipment. 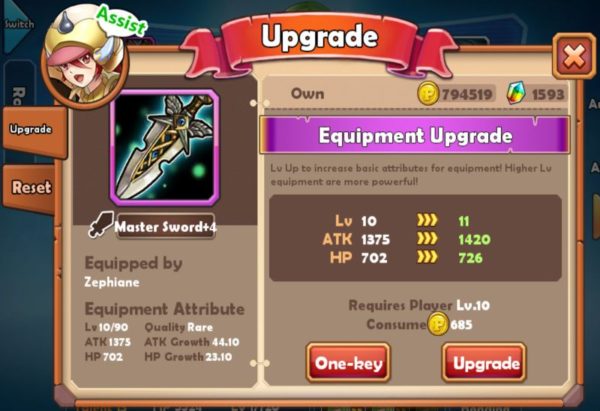 Although leveling up is not expensive by any means, it might be a better idea to focus on leveling up the equipment that is the rarest since other pieces of equipment will become obsolete pretty fast, as you unlock new and better options

Finally, we have Enchanting available for equipment we own, which can be done in the Equipment Center. This basically allows you to use the special potions that you collect during battles to try and Enchant your items to improve their characteristics. Again, this is something that should only be done with your top items because the items required for enchanting are difficult to get.

Auto Raid for items
Hero Girls League doesn’t really reward you with a ton of items when you’re playing the missions – especially not the ones required by your heroes to level up. Fortunately, we have the Auto Raid option which gives us the chance to auto-complete a stage without actually going through the fight itself. 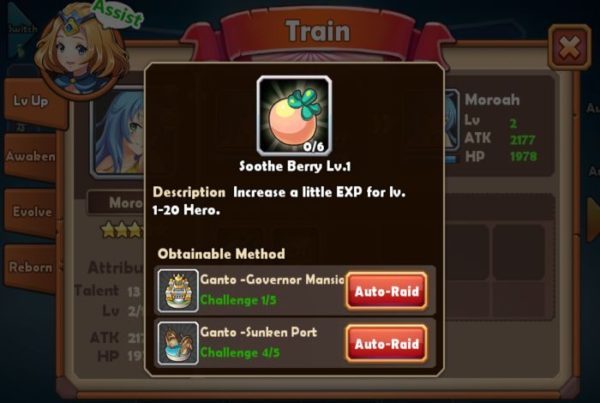 You can do that either from the Adventure map or by tapping the required items from various menus (most likely from the Hero level up menu). You can also re-explore the area if you want to manually go through everything again and get a chance at collecting more items from the final exploration level.

Either method you choose, make sure to use it as much as possible in order to get those items required to level up your heroes. Focus on maxing them out first as this will give you more chances in battles and it will help you progress faster in the game.

These would be, for now, our Hero Girls League tips and tricks. If you have any questions – or other suggestions for fellow players – don’t hesitate to share them with us in the comment section below.