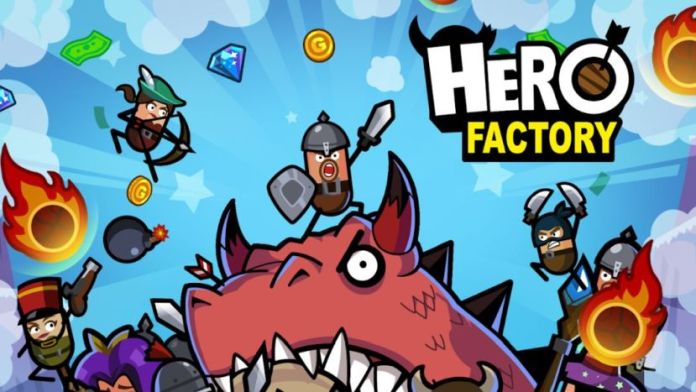 Hero Factory is an idle mobile game with some quirky graphics and fast paced gameplay, one that will keep you busy constantly. I am here today to help you play a better game by sharing some Hero Factory tips and cheats in our complete guide.

The game itself is pretty straightforward, like all idle games, but if you want to make sure that you’re upgrading your troops in the optimal way, as well as learn all the secrets in the game in order to get the most out of it, this is the article that you need to read.

So let’s not waste a single second and instead let’s move on to read our Hero Factory guide: tips and tricks to play better and unlock everything.

The missions will generally guide you through the game and how to handle upgrades, so you should try to follow them as much as possible, but without focusing entirely on them.

For example, a short while after starting the game, you will get a mission that will require you to upgrade your Queen factory to level 150.

If you have just reset your progress (by Going on Vacation), you don’t want to focus on getting there first: instead, level up your Swashbuckers to 150 first, maybe get the Blade Masters to level 50 and only afterwards focus on the Queens.

In other words, even though missions are important to follow and guide you through nicely, your main goal should always be that of optimizing your heroes and the damage that they deal.

Keep the Turbo mode running at all times

If you tap the screen quickly, you will enable Turbo mode in the game, with just a few seconds of super fast production of heroes.

While this is useful and better than nothing, I actually recommend doing something else: watching a video ad to unlock the Turbo mode for 30 minutes. This will put all your Hero factories in turbo mode, giving you a massive boost and helping you progress much, much faster.

So of all the goodies and boosts that you can get from watching ads, this is the one that matters the most in my opinion.

Hero Factory also has a merging minigame in the Enchant section of the game. This basically allows you to merge various Enchantment stones that you constantly earn from defeating enemies and create stones that can be used to level up the equipment of your heroes.

Your main goal is to merge as much as possible and reach the highest level possible in order to get the biggest level boost for the items. So constantly work on mixing and matching, in order to have your heroes doing their best in battle.

But having the highest level stone that you can currently create is not the only thing that you should consider when taking advantage of this in-game mechanic. Playing it smart with the created Enchant Stones will help you even more.

What I actually recommend doing – especially early on when you don’t have a ton of pieces of equipment, is taking advantage of the free redraws when upgrading.

For example, in my case, early on I got a 3-star weapon for my Queen Heroes. In total, in only had 2 pieces of equipment: a hat and this weapon. So every time when I used an enhancement stone for them, if the random draw landed on upgrading the 1-star hat, I pressed the free redraw button and the only other option was my 3-star weapon.

In other words, if you have only a few pieces of equipment for a specific hero, you can easily control upgrading those first. This is really helpful, because eventually you will get more and more pieces, rarer ones to replace the 1-stars that you have by default and the more you can invest in the high quality gear, the better.

Of course, you shouldn’t focus entirely on a single item, especially as really soon, you will need a lot of stones to level them up. Do invest a bit in the low-grade items as well and make sure to level up all heroes’ equipment to progress faster and defeat the bosses quickly.

Upgrade your troops to reach their milestones

Each troop factory that you unlock in the game will have a milestone that, once reached, will give them a massive boost: at level 10, 25, 50, 75 and so on. Make it your goal to reach these milestones, from bottom to the top.

I say from bottom to the top because the troops at the bottom deal more damage than the ones at the top. They are the most expensive as well, so when you no longer upgrading the bottom-most Hero Factory, you can probably still afford to upgrade the one above and so on.

Do it this way to ensure that your Hero factories are optimized, producing the best Heroes that they can at the fastest speed possible.

You will get a bunch of Diamonds for free and you can spend them on unlocking new skills to use in battle (among other things). While I don’t think you should spend all your Diamonds on this, it doesn’t hurt to try and draw some skills – at least three, to have enough to place in your skill box.

The biggest problem with getting Skill Tomes for Diamonds is that you are not guaranteed to get a new skill, on the contrary. Most likely, you will receive duplicate cards which will level up existing skills, making them better and more powerful.

For example, before reaching level 20, I had used all the skill tome purchases that I was allowed for this level and I only had a total of 4 unlocked skills, with two of them at level 3, one at level 2 and one level 1 skill.

In other words, getting all the 10 skills is a VERY expensive business. I also believe that some skills can only be unlocked after you reach a certain level, so it might be wise to save your diamonds and go for skill draws after level 20 or even more.

List of Skills (and best Skills in Hero Factory)

As I said, I have only 4 skills unlocked at the moment (out of a total of 10), but I am listing them below. If you have details about the other skills, please share them in the comment section at the bottom of this article.

El Dorado! – summons a boss made of gold which gives you a bunch of gold coins when killed

Icy Skewers – for a short while, slows down monsters and deals them some damage as well.

Meteor Fall – for a short while, Meteors will fall from the sky, dealing damage to the monsters.

Based on these skills alone, I would say that Roboking is king indeed, because he stays with you for the longest amount of time. I like El Dorado as well for when I need some extra money for upgrades, but with difficult boss fights, any damage dealing spell is more useful – I would go for Icy Skewers, as it also slows them down.

Probably there are better skills that these, but it’s all a matter of luck (and/or spending money) before you can get to them.

When to Prestige (Go on Vacation)

Like in all (or most) idle games, Hero Factory allows you to Prestige – or, as it is called in this game, Go on Vacation. This means that you lose your current progress and start over, but with additional points that you can invest to make it easier for you to progress in the game.

When you prestige, you keep all your Skills, Training levels as well as anything you have unlocked for your troops (equipment and skins, as well as their levels). But all the Hero Factories are reset and you have to start over.

However, when you do this, you earn badges that can be used to purchase new boosts or upgrade existing ones, gaining this way huge bonuses which will help you get to the point where you left from much faster. You also start with a lump sum of money to help you get back on track fast.

To answer your question, you should Go on Vacation in Hero Factory when you earn enough medals to buy at least several new upgrades and ideally unlock one or two new bonuses. If you Prestige too soon, there won’t be a noticeable difference in your overall progress.

Don’t forget that you can “Time Travel” twice each day, which basically means that you can Prestige and grab the rewards without resetting your progress. The first Time Travel is free, so make sure to do that for faster progress.

After prestiging, find the balance between upgrading existing skills and unlocking new ones: usually, a new skill is welcome as the initial boost is larger than what you get with an upgrade.

When it comes to upgrading existing skills, I recommend focusing on direct damage ones, as well as the one that increases the quality of the Enchantment stones you receive.

Use your Diamonds for Daily Deals & Chest Draws

While there are definitely other uses for your diamonds, one of the best ways for you to put them to work is by buying some of the special deals available in the store.

Each day, you will have a set of deals that vary from very good to completely useless: just make it a habit to check them out and purchase anything that’s useful there.

Alternately, you can spend Diamonds for a Normal Box or a Superior Box – each of the containing a piece of equipment of a random quality (with the Superior Box offering better items). It’s good to take advantage of these boxes early on, in order to have an easier time upgrading the rarer equipment.

These would be, for now, our Hero Factory tips and tricks. Do you have additional advice? Let us know by commenting below.