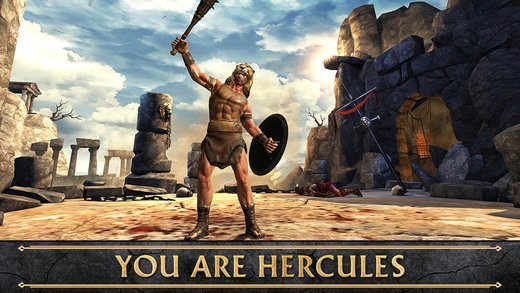 Glu Games have released the pretty good looking (and nice to play) Hercules: The Official Game on the App Store and I am sure that you’re already loving to play it, and defeat all the enemies. However, it’s not an easy task to destroy all your opponents, so we are here to help you with some Hercules cheats and tips for the official game of the movie. We’re creating a strategy guide below, one that will hopefully provide all the info that you need to complete the game. Have fun!

Complete the daily challenges
Every day you have a set of three achievements to complete before the time runs out. Make sure that you focus on doing them first, because your rewards will be great (and you’ll also get premium currency). So always start with the challenges and play to complete them.

Attack after deflecting
After every successful (or even unsuccessful) deflection of an enemy attack, you can “Scratch” an opponent if you attack. Although this won’t take too much of their health, it still does damage and helps you win the fight faster. So deflect, attack, deflect, attack and so on!

Start rage after a couple attacks
Once the rage meter fills up, you can start the Rage combo and cause a ton of damage to the enemies. A good strategy here is to start a rage attack after you’re attacking a couple of times (when the enemy is with his guard down) in order to maximize the damage that you cause to the enemy.

Upgrade, upgrade, upgrade
And this takes us to this: once your hero is too weak, start the upgrading process. I would recommend to always start with your weapon, but you have to keep things pretty balanced in order to keep going and progress through the stages.

Attack using a single swipe
There really is no need to swipe in more directions when using the regular attack, as any swipe will cause the same amount of damage. So don’t complicate things – just make sure to hit the right directions during the Combo attacks.

Replay the Sword for Hire over and over again
It’s the only guaranteed way to make some extra coins for upgrades, even though you’re not making that much. But those coins are better than nothing, so when you hit the upgrade block and you need the extra money, play those missions over and over again until you have enough.

The rest is up for you to do: practice and get your skill high enough to deflect all attacks, win fights to be able to upgrade your equipment and pretty soon you will complete all the Labors!