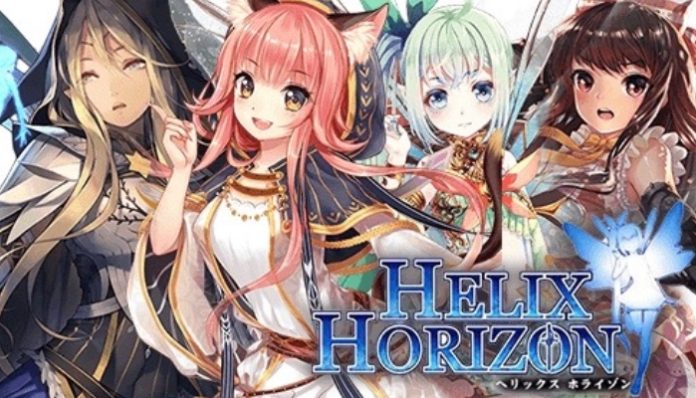 The kingdom of Verselle needs you! Helix Horizon is an exciting new Japanese RPG with cool character designs, star voice acting, and a fun “ring-out” combat system. Your heroes will advance and fight automatically, but if they can manage to push the enemies all the way to the other side of the screen, they’ll be knocked out instantly!

Our Helix Horizon cheats and tips will show you how to build the ultimate team to take out your enemies – either through the old fashioned way or knocking them out!

While the combat system maybe be simplistic in design, there’s a lot of planning involved in the world of Helix Horizon, so let’s get started with our Helix Horizon cheats, tips and tricks strategy guide!

Your Guard team has to be balanced and full of different roles if you want to succeed. If you don’t have a Knight or at least a Warrior in your team, then your whole team is open to attack! At Guard Level 8, you will unlock the fourth slot in your formation.

Since there are five character classes, you won’t have all your bases covered but you should at the very least have one Knight. Knights are the frontline warriors that, while usually lacking in attack power, have high HP and high knockback resistance. They’re perfect for soaking up the frontline hits while your backline attacks the enemy.

Speaking of the backline, this is where your priests, mages, and archers will go. The latter two are your main damage dealers, and keeping them safe from harm is the key to getting through battles. Priests are incredibly useful too as they’ll heal other teammates, keeping them up for longer. They pair very well with knight and warriors.

Power up your entire Guard!

When you visit the Tavern, you might end up recruit UR (Ultra-Rare) or SR (Super-Rare) characters. You’ll probably think that it’s best to focus on just powering up your highest rarity characters, and while you’re partially right, it’s OK to power up the rest of your guard as well.

The reason being is that each character has a “bond” with other characters. You can check this in their profile page. If you have two characters that share a bond, in the event that one of them goes down in battle, there’s a chance that the other character will take their place, potentially saving the battle for you.

For this very reason it’s recommended to power up your entire guard. Of course, as long as you’re careful, this shouldn’t happen too often but it’s good to be prepared just in case.

Upgrade skills and level up!

It’s important to remember that your characters do not receive ANY experience from battle. The only way they can grow in strength is through Upgrading, a process in which you give them Cans of Birds (we’d rather not go into the implications of that) and common rarity characters.

This sacrifices the items and the character receives experience in turn, causing them to level up and grow stronger. Be sure to take the time to upgrade your characters.

You can also level up their active skills by spending some gold. For the first five levels, you only need a trivial amount of gold to level up their skills, so be sure to do this for every new character you get. After that, you’ll need to acquire skill books before you can power them up further.

Collect all the freebies!

If you tap on the banner at the top right corner of the screen on the main menu, you’ll see all of the latest news and events. Right now since the game just launched, there’s tons of freebies for newbies to grab.

The “Daily Allowance” banner lets you claim free AP to play the story mode stages more. There are three slots of AP to claim, but you need to claim each one during a specific time frame. Be sure to come back when one is ready!

The “Rookie Camp” banner gives you free gold, bird cans, character dupes, and even armor once your Guard reaches a certain level. Play through the story and come back to claim your rewards.

The “Elite Breakthrough” banner also gives you similar stuff found in the Rookie Camp banner, but to claim these you need to earn a certain amount of stars on the story mode levels. Just make sure that none of your characters go down to earn all 3 stars on a level.

The “Newbie Bonus!” banner is basically a special one-time daily log in checklist. You’ll get free rewards for simply logging into the game each day (on top of the normal Daily Log in rewards!), so be sure not to miss a day.

That’s all for Helix Horizon. If you’ve got any other tips or tricks to share, let us know in the comments below!