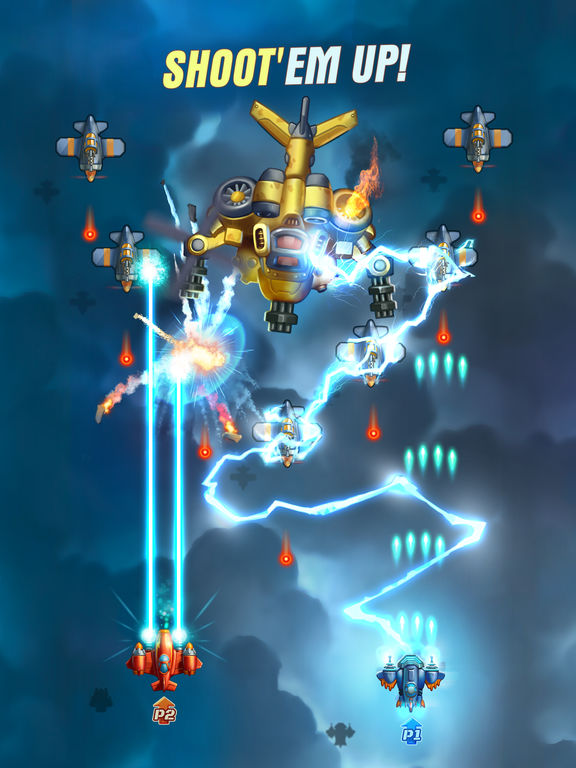 The once peaceful nation of Verdia is under siege by the relentless forces of Atroxia. Verdia needs your help! Suit up and take to the skies in HAWK: Freedom Squadron, a fast-paced shoot ’em up that let’s you take on the Atroxian forces solo or with a friend! The skies are always better with a buddy! With a ton of planes to fight with and a bunch of levels to fly through, there’s tons of stuff to do here.

We’re here to help you take out the Atronxian forces with our HAWK: Freedom Squadron cheats, tips and tricks strategy guide!

Every time you destroy an enemy ship your combo counter goes up by one. You can see your current combo multiplier at the top right corner of the screen. It goes up to a maximum of x20, which means every kill you land is worth 20 times the amount of points! You’ll want to maintain this combo multiplier for as long as you can if you’re shooting for a high score. The only time your combo breaks is if you take damage. You don’t need to worry about destroying ships as fast as you can, as there is no timer. Just focus on evading bullets and obstacles!

Every now and then you’ll encounter a large group of enemies that will be just too much for you to shoot through. Usually a nuke will spawn alongside these big groups, so keep an eye out for them. Shooting them enough will cause a super explosion wiping out everything on the screen! They’re great for clearing big groups, and as you can probably imagine you’ll get a ton of points for doing so.

If you’re looking for better devices for your ship, consider using the black box. The black box lets you combine four devices to make a better one. If you use the same device for all four slots, you’ll get that one back but with improved quality. Make sure to visit the black box whenever you’ve got extra parts you don’t need anymore.

Early on you’ll be tempted to try to squeeze in as many shots as you can. You can do this but be careful! Even if you have devices that increase your health a lot, your ships are still very fragile. Be especially careful if you’re still using the Sparrow, the default starting ship. If you don’t think you’ll be able to destroy an enemy ship before it reaches the bottom of the screen, don’t get greedy and sandwich yourself! Remember that it’s more important to reach the end of the stage than it is destroying every single enemy.

While it’s important to keep your eyes on the bullets heading your way, it’s also very crucial that you don’t lose track of your own ship or block yourself with your fingers. Try to start your dragging away from your ship so that you can see where you’re going. Also, your mileage may vary on this, but we found it easier to concentrate our own ships when things get crazy. If you’re fighting a boss and bullets are going everywhere, it was easier for us to dodge them by just looking at the immediate area around our ship.

That’s all for HAWK: Freedom Squadron for now. If you have any other tips or tricks to share, let us know in the comments below!