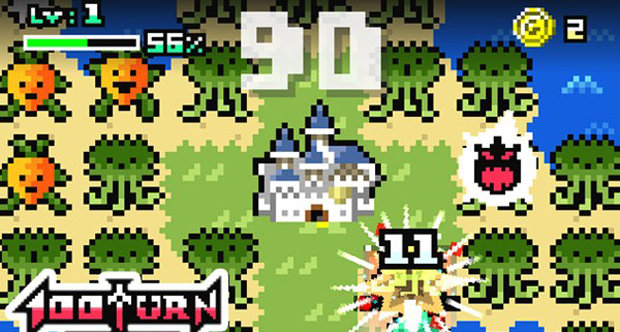 If you are one of those gamers interested in some quirky games which break all genres’ conventions, there’s a good chance that you already know about Half Minute Hero.

Half Minute Hero has been released a few years ago on PSP before receiving an enhanced port now available for download on Xbox Live. What made the game incredibly interesting is the unique time mechanic which influenced the whole game.

The main game mode of Half Minute Hero is a Japanese Role Playing game where you will have to complete each stage in less than 30 seconds. You obviously have the chance to increase the available time by using money, as well as buying new equipment and complete sidequests. Everything is made even better by the incredible humorous writing and the excellent pixel art used in the game.

The latest issue of the Japanese magazine Famitsu has confirmed that the game’s designer Kotaro Yoshida is currently working on a new iOS title called 100 Turn Hero. Actual gameplay details are scarce at the moment, but it looks like you will have to defeat single enemies without having to use more than 100 turns. It’s yet another game that spins things around and gives a unique and fresh perspective on video games’ genres.

100 Turn Hero will be released in Japan on January 17th. Unfortunately things don’t look too good for the West, as the previous Half Minute Hero title has not been released in the West. 100 Turn Hero doesn’t look like a text heavy title so it eventually could be released in North America and Europe as well, just don’t hold your breath.