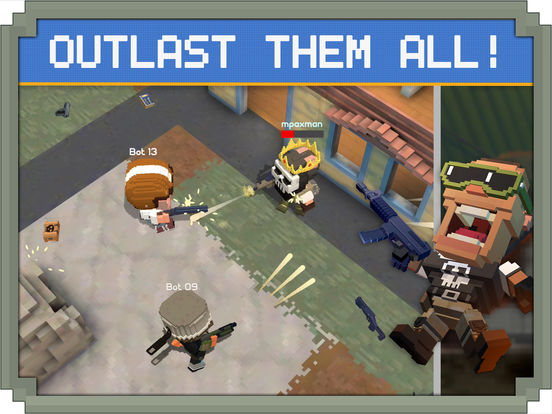 It’s the ultimate battle royale experience on your mobile device! Guns Royale brings the battle royale genre similar to games like Playerunknown’s Battlegrounds and Fortnite Battle Royale to mobile gaming, and it’s time to go up against the world! It’s you against 15 other players in a match of wits and skills. Adapt to survive and outlast your opponents to become the battle royale champion! Our Guns Royale cheats and tips will give you a leg up on the competition.

Guns Royale is one of the most competitive games on the mobile market right now, so let’s start climbing the leaderboards right away with our Guns Royale cheats, tips and tricks strategy guide!

Try to spawn near buildings!

Buildings and houses are where you’re going to find most of the good stuff. Just keep in mind that pretty much everyone in the game is going to have the same idea as you, so be prepared for a fight!

Alternatively, even if you do spawn near someone else, you can always just run away. Every player in the match only starts with a measly pistol that deals minimal damage, so it’s okay if they scrape you a couple times. Run around and find a better weapon, then turn the tables on them!

Fully equip yourself with gear!

During the early game segments, you’ll want to scavenge around for as many guns as you can find. Ideally you’ll want a full loadout, which includes a new pistol, a shotgun, an assault rifle, and a backpack. Once you’ve fully decked out, it’s time to hunt down the other players!

You can of course engage and chase down other players you run into, as you will most definitely run into someone else while scavenging. Just be careful though, as you won’t know what kind of guns they’re packing. Remember that each gun has a rarity which represents the overall power of the gun. There’s common, rare, and epic.

You can find different kinds of clothing lying around that will make your character look unique. Not only that, but clothes actually have stats tied to them, so don’t forget about it! You’ll know if something is an upgrade if you see a bunch of green arrows pointing up. Clothes can reduce the damage you take, increase your movement speed, and more. Every stat helps; for example certain head pieces will actually zoom your camera out, helping you see other players earlier than they can see you.

Always have a medkit on hand!

The medkit button is located underneath your clothing boxes on the left side of the screen. Try to have one on hand at all times because you never know when you’ll be in a pinch. There are a couple things to keep in mind with the medkit, however. For starters, the health recovery isn’t instant – it takes a couple of seconds to kick in. Secondly, medkits do not heal that much. They heal about maybe 20% of your health bar, so don’t rely on them in the middle of a firefight. By default you’re only able to carry one at a time, but with a good enough backpack you can carry two.

Grenades are the answer to all your problems!

Grenades, grenades, grenades! These explosive little ditties are great for almost any occasion. Big firefight break out near you? Why not clear out the room with one well-placed grenade! Is someone hot on your trail? Drop a grenade behind you to leave an explosive surprise for them! Bottom line: Grenades are awesome and don’t be afraid to use them. If you hang onto them for too long, you’ll probably lose the opportunity to use them! Just be sure not to blow yourself up!

Keep an eye on the play zone!

The play zone is indicated by a broken white circle. As time goes on, the play zone will gradually get smaller and smaller, and if you’re outside of it you’ll take damage! Be sure you’re aware of where the current play zone is at all times – you don’t want be caught on the outside of it when it starts to shrink!

That’s all for Guns Royale! If you’ve got any other tips or tricks to share, let us know in the comments below!